Cover Reveal for Sweet Confections, and a giveaway!

In my last post I announced that my friend, Danyelle Ferguson, and I are creating two series set in the same town with cross-over characters. Many, many thanks to everyone who voted. It was so much fun seeing it all come together and getting the feedback. The winner–which garnered 50% of the votes–was Crystal Creek.
The winners of the free book and name our city founders were:
#37 – Rebecca Belliston
#82 – Tamera Westhoff
#114 – Stephanie Taylor
Danyelle’s book will be the first Crystal Creek romance and it’s coming out in April. I’m so excited to see her take this step and to be able to play a little bit with her characters while I’m working with my own.  She’s been working hard on tweaking the cover and making it come together–what do you think? 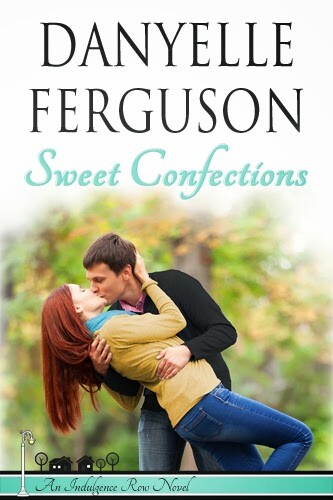 Cute, huh? And don’t you love the little strip across the bottom with the houses? That’s because the series is going to be about women who renovate and move into a bunch of abandoned houses and make a great shopping district out of it. I’ve heard all about her plans for the series and can’t wait to see it all come together! It even has me working on my first book in my In The Garden series (still playing with that title) which will be set in Crystal Creek as well.
So, a little about the book:
According to Rachel Marconi chocolate heals all wounds. That and throwing darts at pictures of her ex-boyfriend. Burned by yet another bad relationship, Rachel decides to reprioritize her life, putting her dream to compete on a  Food Network Challenge on the top of her list and dating at the bottom crossed out in red sharpie.
But what’s a girl to do when a certain sexy guy keeps asking her out?
Cue in Graydon Green, a former pro hockey player turned restaurant owner. After a lot of persistent and humorous teasing, he finally convinces Rachel to commit to a date. Just when things begin to warm up, threatening notes directed at Rachel arrive. When her bakery is vandalized, Graydon’s protective streak goes on red alert. Is it her obsessive ex-boyfriend stalking her? Or maybe a challenger trying to sabotage the competition?
Either way, Rachel is definitely going to need more chocolate – perhaps drizzled over ice cream and devil’s food cake.

Danyelle Ferguson is a thirty-something mom with the heart of a college student obsessed with chocolate and yearning for the thrill of romance. In her day job, she does a juggling act trying to cram in her writing deadlines between the never-ending laundry pile and constant calls for mom. You can find out more about Danyelle via the web: