So I’ve been mulling over this idea for a few days and decided to try something new on my blog. For anyone who doesn’t know, I’m an EMT with a volunteer ambulance service, which means that I have a good practical background to medical and trauma emergencies–at least the part of them that EMTs see. Since hurting your character, or someone they love, is a great way to shake up a story, I thought I’d start a weekly column with basic medical info for writers. I’ll try and keep the descriptions in plain English and make distinctions between how a Basic, Intermediate or Paramedic service would handle things. Every state has different guidelines and every department can have different protocols, so this will just be a rule of thumb.

**Disclaimer: this is only a quick-and-dirty description of what one might expect in various situations, and is not intended to be medical advice. If you’re have symptoms or concerns, please see a doctor!

And now on the the fun stuff: Heart attacks

I chose heart attacks first because there are a lot of misconceptions about procedures.

When the call comes out for a possible heart attack, the first thing I do as an EMT is hope we have a fourth person show up because a lot has to happen very quickly when we respond to a heart attack. We usually run with three EMTs, but some departments only have two, then dispatch a second ambulance or fire truck if needed.

There are four jobs: Airway (someone to make sure that the patient gets oxygen to their lungs. We use a BVM (Bag-Valve-Mask), often called a bag, like the one below, which I snagged off of Wikipedia: it hooks up to oxygen and keeps us from having to worry about being too close to the patient’s mouth when they throw up–which happens a lot with CPR.)

We try and get an intubation tube into the lungs as soon as possible and place our bag on that to deliver oxygen more efficiently. A tube takes work and not every EMT can put one in, it depends on their state and local department protocols, but it’s the most effective option. I think Paramedics everywhere can intubate, and they can even do it on a person who is alert because they have medications that will stop the gag reflex. In my department Intermediates can only do it if the person has no gag reflex–which basically means they have to be clinically dead first. In many states even Intermediates can’t intubate or do many of the skills that we can, and Basics would have to stick to the BVM. 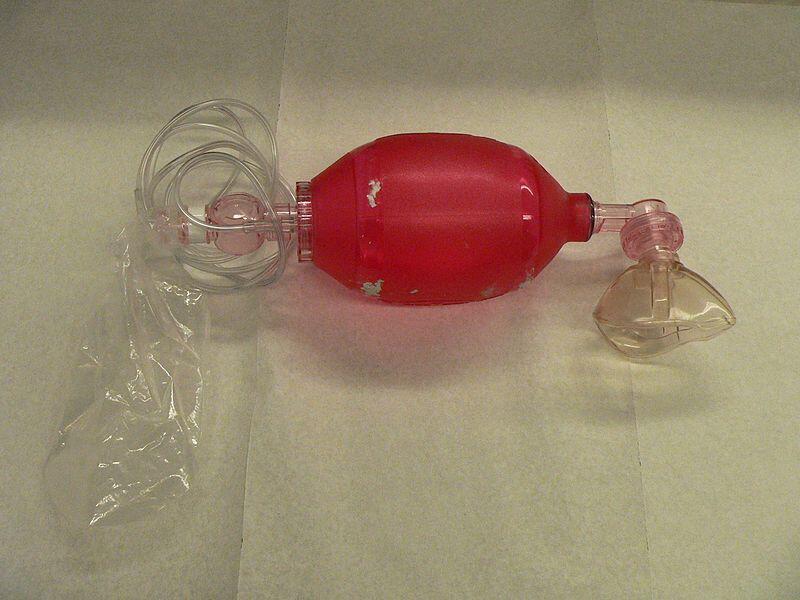 IV access: This is the best way to get medication and other fluids into the body. Medication that we give to stimulate the heart can be given through a breathing tube, but it’s not as effective, so an IV is best. We like to try a vein lower in the arm if there’s a really good one, but with heart attacks there’s not a lot of time, so we usually go for the AC (ante cubital)–which is the one inside the elbow. Some services have an IO gun (IO stands for intraosseous, which means the line goes into the bone marrow, usually in the tibia–the bigger lower leg bone–just below the knee instead of the blood stream. Learn more here.). IO is easier if a patient’s veins are difficult. We don’t carry the gun, so we have to do them by hand, which means we only do IOs on small children whose bones aren’t as hard as adults, and rarely then. Basic services and some Intermediate services can’t do IVs or IOs.

Heart monitor: ours includes the blood pressure cuff and oxygen sensor, and also hosts the defibrilator–the machine that shocks the patient if it’s called for. More on this later.

Compressions: I’ll talk about CPR in more detail in next week’s post. Occasionally we’ll get to a patient who is having a heart attack, but is still awake, so no compressions. We still monitor their heart, usually with the shock pads, in case the situation changes. In this case, we get them into the ambulance as soon as possible and get the IV started.

Some departments are purchasing machines that do compressions for you. You can read more about these in Wikipedia. My county’s budget doesn’t run to that kind of money, and I know there are several different machines, not all of which work equally well, but a lot of rural departments that have a long drive to an emergency room are getting these because it’s hard to do compressions for long periods of time and still be effective. Again, more on CPR next week.

So, when we arrive at the scene, we’ve already decided who does what. If there aren’t four of us, and there isn’t a first responder on scene to do compressions, then IV access usually waits until the shock pads are placed on the patient’s chest and side, because we need to know what’s going on. Compressions start immediately, and the airway person works on getting access to the lungs.

Okay, so we’ll skip ahead. The IV person has a bag of saline hooked up, the shock pads are on and we’re getting feedback from the AED (Automated External Defibrillator), the airway person has gotten a tube into the lungs to ensure they can get air in there (if they can), and compressions are underway.

If you can’t do IVs, you basically start compressions, get the patient onto a gurney, and get them into the ambulance. Honestly, the less time you spend on scene, the better because the hospital can do way more for that patient than we can.

When to shock:
Okay, so you’ve all seen a scene on TV or the movies where the patient’s heart stops beating and they shock the patient to restart the heart. While you could twist logic to make this work, it’s not actually accurate.

Do you remember me talking about how the machine is a defibrillator? That means a patient has to be in fibrillation, (which is when the heart is getting signals to contract so close together that it just quivers like gelatin instead of pushing blood.) Yes, that means the person has electrical activity in the heart. What the defibrillator does is interrupt the super-rapid signals in the hopes that it will ‘reset’ the heart, so it will start to contract normally.

Now, I understand paramedics often have special gear, so their defibrillators may allow them to do different things like control how strong of an electrical pulse they give to the patient, or forcing the machine to shock a patient who isn’t in fibrillation (but why would they, it wouldn’t help at all. Promise.) The machine we use won’t let me shock a patient without an electrical rhythm in the heart.

Yes, that means if the patient has been dead for four hours before anyone find them, the EMTs will not shock the patient. Sorry. Doesn’t matter if there’s no recognizable rigor mortis yet. No rhythm=no shock (Yes, I saw this in a popular murder mystery lately, how did you guess?)

From what I gather, outside the state of Utah most departments run either Basics only, or they have Paramedic services. I’m not aware of any towns in Utah that don’t have at least Intermediate service, but I could be wrong. If your town doesn’t *at least* have a population of 20K, you probably aren’t going to have Paramedics unless it’s a very affluent area because not only do Paramedics require expensive equipment, but they have to go to college full time for a couple of years to train, so they have to have a regular salary, which means a big annual budget for their departments. Utah has no Paramedics between Springville (just south of Provo) and Cedar City–about 210 miles to the south). Yes, I’m serious.

Some areas with lots of visitors during peak season have Paramedics running during those months. Some departments run Basic ambulances, but have paramedics close by they can meet up with if needed. If you want to know what protocols are where your story is set, contact an ambulance service and find out. Even if you make up a town for your story, a nearby town of a similar size should have a department with someone who’s willing to answer your questions.

If anyone has a specific emergency question they’d like answered for a book they’re working on, feel free to contact me and I’ll post the answer here in the future.