Book Review: Who’s at the Door? A Memoir of Me and the Missionaries by Dan Harrington

I really wasn’t sure what this book as about, besides the obvious title, when I was asked if I would be willing to review the book. Still, I’d heard good things about the book, so I decided to give it a try. 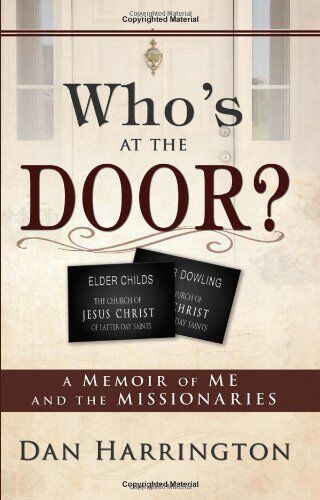 Funny thing was, I expected Dan Harrington’s account of his experiences with the Church and the missionaries to be his conversion story–but that isn’t what it turned out to be. Instead it’s a human interest story that included a lot more of himself than he’d planned on.

I know there are a lot of memoirs out there–and many of them seem to be more tell-alls than anything–but I found this one to be fascinating. I don’t normally read a lot of non-fiction, though I pick up a few each year, more for research than anything else.

Harrington is a bright, witty writer whose story captured my interest right off. He’s very candid about his impressions of the Church, and told the story with a very fair hand throughout. Each chapter gives more insight into him, his faith, his search for truth, and his stumbling blocks along the way.

Harrington was just starting his work as a freelance reporter when the missionaries first showed up at his home in Augusta, Maine. He let them in because he wanted to do a story on them for the newspaper. That opened the door to more teaching opportunities and friendships that developed with the missionaries, and the exploration of many religions and their beliefs for the newspaper. His original expectations of who and what Mormons were had me chuckling as it fell somewhere between the Amish and a militant cult.

At less than 150 pages, the story is short, but well worth the time. I absolutely recommend it whether memoir is your usual thing or not, whether you’re LDS or not. And I really hope Dan does another book some day, fiction or non-fiction, I don’t care, I’d pick it up in a heartbeat.

Dan doesn’t have a website that I could find (and if you Google him, you’ll pick up lots of references to the big poker player–which is not the right man). But his blog can be found here, and you can read a fun interview Sarah Eden did with him for one of her I Need Friends Friday