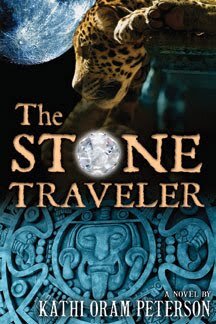 Kathi is having a contest in conjunction with her blog tour, so read to the bottom to learn how to enter–the grand prize is a Kindle–I know, I wish I could enter!

Sixteen-year-old Tag can’t believe he’s in this much trouble. He’s not actually a member of the gang known as the Primes-all he did was spray paint some graffiti that caught their attention. In all honesty, ever since his dad and brother left, Tag just wants to be alone. And it’s certainly not his fault that the Primes nearly beat up his goofy cousin, Ethan. But his mom is furious about these gang-related activities and insists that Tag spend the whole summer at his grandpa’s lakeside cabin, which is not Tag’s idea of a good time. So he does what any self-respecting teenager would do: run away. But he doesn’t get far before he encounters three strange men carrying an even stranger object-a stone that glows with radiant light as bright as a thousand sparklers.

Tag doesn’t steal the stone-not exactly. He feels like he is supposed to take it. But he doesn’t expect the stone to transport him through space and time to a place he’s never seen before-a place that looks an awful lot like the ancient lands described in the Book of Mormon. And he definitely doesn’t expect to join Sabirah, the entrancing daughter of Samuel the Lamanite, on a quest to rescue her father and brother from the evil King Jacob. And he absolutely doesn’t expect to be captured by Jacob’s minions and prepared as a sacrifice to the evil idol of the city. But just as Tag faces his death, a terrible storm begins to break, and the ground cracks into jagged pieces. And he’s not sure which event will impact his life more: his captor’s knife coming at his body, the violent tempest sweeping the land . . . Or the men who later appear, glowing even more brightly than the traveler’s stone.

I read Kathi’s previous Book of Mormon time-traveler story, so I knew I was going to enjoy this one, and I wasn’t at all disappointed. Tag wears makeup and black clothes because he wants a little rebellion, but not enough to actually get into trouble (if you don’t count his, um, efforts at giving beautiful artwork to the community, aka vandalism). He’s a good kid making decisions that could easily take him somewhere he doesn’t want to be. Then he re-appropriates the strange glowing stone and finds himself in another place and time.

Tag is adaptable, courageous, and a little confused, but very likable. The plot moves quickly, provides plenty of action and provides just enough historical context to keep the reader immersed in the story without feeling like the plot was contrived to show off how much research the writer did (a major irritation of mine when it comes to historical books). Instead it felt genuine and intrigued me.

And here’s the info for the contest:
The Stone Traveler – Blog Tour Contest When: Weekdays in September. Important Rule: Leave a comment on “every” site on the tour. Monday through Friday commenter names will be collected from the blog tour. On Saturday a name will be drawn to win a prize that includes a very cuddly toy jaguar; a stone necklace; and chocolates with the flavor of South America—real cacao and chili. The winner will be announced on the following Monday.

The GRAND prize for The Stone Traveler blog tour will be a (drumroll, please) Kindle. The cutoff to be eligible is midnight on September 30. The winner will be announced October 4th. If you find the tour midway through and want to participate, you can still go back and comment on every blog simply by going to www.kathiswritingnook.com. Starting in September the sidebar will list each stop on the tour as they are posted, making it very easy to click to any of the sites and leave a comment. AND even if you’ve already won one of the weekly drawings, your name will still go in the jar for the Kindle.

You can learn more about the author and where else to stop on the blog tour at her blog.