I first became acquainted with Gregg’s work last winter when I read his Whitney Award finalist book, Altered State (check out my review here). He’s a talented writer with a gift for details, 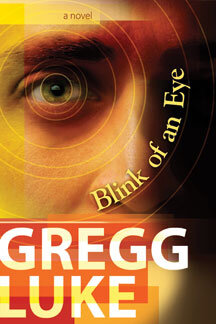 description, great plots, likable characters…I could go on and on. I was thrilled when he offered to send me a copy of his new book, Blink of an Eye for review.

The book is about Joseph Ramirez, middle school science teacher, who is in a debilitating car accident that should have killed him. Due to his crushed skull, he spends three weeks in a coma, then another five weeks in the hospital recovering. During this time he starts having disturbing dreams about his childhood. Dreams so real, he believes they are actually repressed memories.

Though Joseph had always believed he’d had a happy childhood, the feelings of fear and visions of violence in his dreams tell a different story. With the help of defense attorney Michelle Haas, and a great therapist, he delves into the truth of his past, finding truths he never would have suspected, and raising more questions–was he actually guilty of the murder his hospital roommate says he confessed to?

I thoroughly enjoyed this story (in case you didn’t already pick up on that). The plot is intriguing, has plenty of twists and is obviously well researched. The details and descriptions are vivid and real, but the scenes of violence are largely sounds heard in the background and emotions the child-Joseph felt, so they shouldn’t be at all difficult for any but the very most sensitive readers. My only issue is that he has Joseph’s hispanic mother speaking to him in accented English instead of in Spanish (as she almost certainly would have been when they held private conversations), but the light dialect Gregg gives her makes it easy to keep this woman’s background and history in mind with every sentence and makes her more real too, so that’s just a tiny quibble. I love that she’s constantly trying to push him toward a relationship–as long as the woman is “e’Spanish” like he is–and that she thinks his LDS conversion nine months earlier is just a phase he’ll grow out of.

If you haven’t read any of Gregg’s books, go check them out on his website, or pick one up at a store–you can’t go wrong. I expect he’s got another serious contender for this year’s Whitney finalists!

P.S., if you have read any great new LDS fiction released in 2010 that you think deserve to be considered for an award, visit the Whitney website listed above and nominate it!