Book Review of “The Dark Divine” by Bree Despain

Last Saturday I signed books along with about 40 other authors at Authorpalooza at the Barnes & Noble in Sandy, 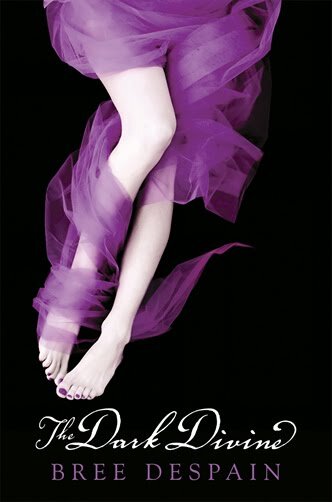 Utah. I love big signings if for no other reason than to get to know other authors and check out books I hadn’t heard of before–and with this many authors, there were plenty I hadn’t met yet. One of those authors was Bree Despain, whose first book, The Dark Divine flew off the table almost as fast as the free nail polish she gave away. (The purple nail polish was created specifically to coordinate with the toe nails on the cover of her book, which is completely awesome, and the fact that it was purple was like the buttercream frosting on the cake.)

I watched people line up at her table, then linger to chat for the three hours we were there (yes, I did sign a respectable number myself, but she was one busy lady!). Since I had looked up her book only a couple of days earlier after I found out Debbie at Cranberryfries was doing a “The Dark Divine” cake contest, I lingered and listened, and finally broke down and bought a copy of Bree’s book. I read a bit when I reached home late that night, then sucked up every free minute the next day reading, and finished it before the day was over. So, yeah, I liked it. Before I get into any specifics, check out the book blurb I found on Amazon.

Grace Divine, daughter of the local pastor, always knew something terrible happened the night Daniel Kalbi disappeared–the night she found her brother Jude collapsed on the porch, covered in his own blood–but she has no idea what a truly monstrous secret that night held.

The memories her family has tried to bury resurface when Daniel returns, three years later, and enrolls in Grace and Jude’s high school. Despite promising Jude she’ll stay away, Grace cannot deny her attraction to Daniel’s shocking artistic abilities, his way of getting her to look at the world from new angles, and the strange, hungry glint in his eyes.

The closer Grace gets to Daniel, the more she jeopardizes her life, as her actions stir resentment in Jude and drive him to embrace the ancient evil Daniel unleashed that horrific night. Grace must discover the truth behind the boy’s dark secret…and the cure that can save the ones she loves. But she may have to lay down the ultimate sacrifice to do it–her soul.

Okay, so if you liked Twilight, you’ll probably enjoy this book, it has the same feel to it in many ways, though as Bree said, “You can swing a cat and are guaranteed not to hit a single vampire.” So those of you who are tired of vampires may breathe freely.

I found the juxtaposition of Grace dealing with the troubles she dealt with, while juggling the issues in her family was totally realistic. The struggle her father went through to be the kind of leader in his church that a pastor ought to be, and taking on too much was really interesting. There are a lot of deeper issues in the book as far as good verses evil, and making decisions for good, despite the fact that those choices came with a price. Yet there was nothing remotely preachy about any of it–it was embedded so deeply in the story, an organic part of who the characters were.

Bree’s characters were well rounded and believable, the story unique, and she hit her target audience straight on. Though the characters swear a bit (and bite their tongue in response–Grace is a pastor’s daughter after all, and really tries to curb her tongue most of the time), there is no unnecessary violence, and nothing beyond kisses to worry about. I’ll happily give this book to my fourteen-year-old niece to read when she comes to visit.

Bree said her deadline for the next book in the series is only weeks off, so hopefully the wait won’t be too long. You can learn more about Bree and her books on her website.

On a side note, I did enter a cake in the cake contest, but you’ll have to wait until after judging before I’ll post it here.