I’ve been hearing fabulous things about Traci’s books for several years now, but hadn’t squeezed in time to read one until last 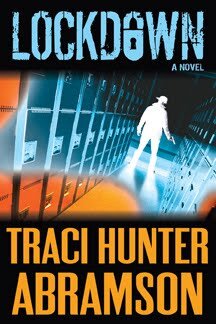 week. Traci says in the front of the book that she is from Virginia and was hit hard when the Virginia Tec tragedy occurred. This book was written in response to that grief. As a former employee of the FBI Traci has a good grip on how these events unfold, what causes them, and how they are handled by police and special forces. Here’s the blurb:

Only twice had she set foot inside the building since the massacre. The first time had been just a month after the tragedy .. . . The second time she had returned to the scene of the crime had been two days ago when she forced herself to enter the building to check on the temporary office for the SEAL team. The counselor she had seen in the months after the shooting had encouraged her to face her fears, but now . . . Riley wasn’t sure she was ready to face them after all.

Caught up in a hostage situation that is hauntingly familiar, Riley Palmetta once more finds her life hanging in the balance. What starts out as a well-organized and highly intensive training course for the prevention of random acts of terror quickly turns into a real-life nightmare of suspense and intrigue that will test the faith and finely honed skills of Tristan Crowther and his elite group of LDS Navy SEALS.

For Tristan, this is not only a race to save lives; it is a deeply personal mission that moves relentlessly toward an irreversible crisis. And life-as well as love-is on the line.

I really enjoyed this book, and stayed up late two nights in a row to push through it (even though I originally thought I would just read the first chapter before dropping off into sleep). The relationship between Riley and Tristan is sweet and believable. It hooked me from the very first moment, and had me hanging on tight as they dealt with emergencies and personal crisis. Riley’s demons leftover from her experiences in the massacre at her own school are deftly handled.

I’m anxious to look up Traci’s other books and completely understand why this one is a finalist for the Whitney Awards. I highly recommend it!