Okay, so you know I like to do cakes and play with new thing, right? And I believe I’ve talked about this fun cupcake book more than once but I haven’t had many chances to 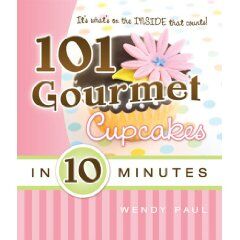 actually try the recipes in “101 Gourmet Cupcakes in 10 Minutes.” So tonight, since I had a few extra people staying at my parents’ house to share with, I tried out the Root Beer Float cupcake recipe I’ve had my eye on for a while.

First off, can I just say how easy this recipe was? Tonight when I was in a rush, easy was perfect for me and I literally had them in the oven within 10 minutes of pulling out my cookbook for directions. Since I already had some plain buttercream in the fridge leftover from my last cake project, I just added the flavoring and whipped it up while the cupcakes baked, so it really was super simple for me. (By the way, buttercream frosting can be stored in the fridge for two weeks after you make it if it’s in an air-tight container, so if you know you’ve got another project coming up soon, just store it for later.)

As for the taste, we had mixed reactions. Well, let me qualify that–the cupcakes were super good, and everyone loved them, including the kids who said they didn’t like root beer. The frosting was root beer flavored also, and some people weren’t so crazy about that, but I thought it was great. Some of them would have been happier with normal butter cream frosting, so you may want to make a few of each if you’re going to mix up a batch for a party.

Also, the batter is thicker than a normal cupcake batter, so you don’t fill the cups as full as you normally do. My mix only made 17 cupcakes instead of 2 dozen, but it would have been better if I had filled them a little less so it didn’t run over the top. Because of the extra sugar in the mix, they also fall just a tiny bit when they cool, but not enough to worry about, so just added a bit more frosting to the depression and enjoy!

I haven’t gotten permission from author/chef Wendy Paul or the publisher to post any recipes, so you’ll have to check out the book. Maybe down the road I’ll get permission to post a couple as I give them a try. I’ll post more of my reactions to the recipes as I work my way through the book, so check back for an update. =)