Come to the Boutique!

My sister Kristi puts together this great boutique in West valley City every year. Tristi Pinkston and I will be signing there all day tomorrow from 9 to 5. 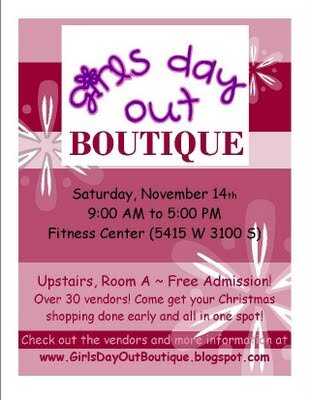 In other news, I’ve spent the past two days at my alma mater–Millard High School–talking to the English students about writing. It was fun, but a bit disorienting to have English teachers asking me questions about writing as if *I* were the expert. Especially since both of them graduated from the same high school several years before I did. It was cool though. Most of the kids paid attention at least most of the time. And only a couple of smart-alecs asked me if I was rich now that I published a book. haha They were disappointed when they found out it wasn’t *easy* to make a living writing! I had several students approach me later and asking me writing questions and had a chance to have actual conversations a couple of them during breaks and while they T/A-ed

I had writer friends asking me about what I do when I go to schools, so I tried to record the last session, but the camera shut itself off after four minutes, so I guess they’ll have to go on that. I’ll have to play with it and see if I can figure out why it turned off before I head to Kanab on Tuesday.

Oh, looky there–it’s not even 10 p.m. and I have a little time to write and still sleep reasonably early (for me) before my alarm goes off at 5!