Book Review: “Illuminations of the Heart” by Joyce DiPastena

I love a good historical romance. I love them even better when I don’t have to worry about steamy bedroom scenes. Joyce Di Pastena’s second historical Illuminations of the Heart has it all: fevered kisses, 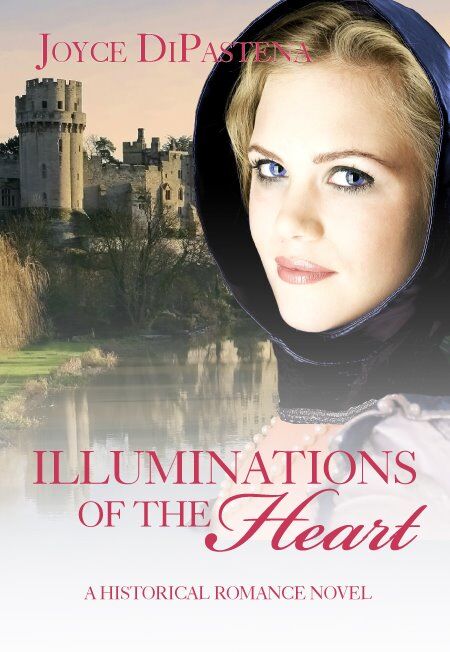 The story is about a young, beautiful widow, Siriol de Calendri (Siri to her friends), whose husband has died, her parents and brother have also died, and in the twelfth centry, it was not safe for a woman to be single and unprotected. Before he dies, her brother requests that she travel from Venice, where she lived all of her life, to France where her father grew up. He has put her in the safe keeping of his friend, Triston de Brielle, and requests in a letter that Triston find her a new husband.
The biggest problem–she looked almost identical to Triston’s dead wife. Having her around reminds him painfully of what he has lost, but he and Siri are drawn to each other. He vows to find her a husband as soon as possible to bring an end to the painful feelings she rouses in him, but Siri decides she wants no other man but Triston. As their feelings increase, their safety is threatened by accusations of treason and a neighbor who will stop at nothing to gain Siri’s hand for himself.
I admit, I read the whole book in a day. Well, actually, in a night. I’m not going to say how late I stayed up to finish it because when I put it down halfway through I couldn’t shut the story out of my mind enough to sleep.
Joyce’s writing is vivid, her characters likeable and realistic, her dialogue fresh, and her descriptions make the scenes breathe. I wondered right up until the end how they would be able to overcome the obstacle between them.
You can read the first chapter of this book on Joyce’s blog. It is being published by Walnut Springs Press and is 425 pages. You can buy the book at Amazon, Deseret Book, or Barnes and Noble.
Don’t forget, if you write a comment for this review, you will be entered to win an autographed copy of the book, and one of three gift certificates for $10, good for the puchase of the book at one of the online stores listed above. Check out the other reviews on this blog tour over the next six weeks for more entries.