So I’ve read Shannon’s books, Makeover (which I lost as I was about to do a review, so I didn’t ever review it, but it was great–go check it out!) and Soul Searching. I enjoyed them both so much that picking up her latest offering, Taking Chances, was a no-brainer.

And as I began to read the book, there was no question in my mind why it was a Whitney Award finalist. Maggie Tierney is a quirky, strong-willed, life-loving, twenty-four-year-old artist whose father died of leukemia before she was even born. Luckily, she inherited a great deal of her father’s talent for painting, and now each of her paintings sell for prices pushing half a million dollars. 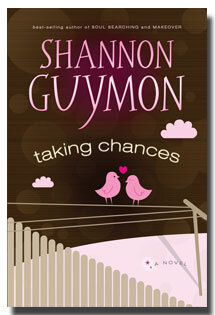 Because her grandmother Palmer allowed Maggie’s mother to be sexually abused by her stepfather, and because Maggie’s Tierney grandparents blamed her mother for Maggie’s father’s decision to leave his chemo treatments and run away with his young neighbor, Maggie has never met any of her extended family.

That is, until her great-grandmother Tierney died and left Maggie her house in Alpine. Despite the fact that Maggie could have bought up the whole neighborhood for less than her last show sold out for, she figured, ‘hey, free house,’ and decided to spend six months living in Alpine before she made any decisions about selling it.

Along comes her next-door neighbor, Luke Peterson, a man who was still dealing with his fiancé’s death. He takes one look at her muscling her boxes of painting supplies and easel from her car and decides she must be a PETA loving, tree-hugging, spoiled rich girl who would quickly convert the charming pioneer home into a Tuscan villa.

And much zaniness ensues.

Shannon’s talent is so impressive. I got to the end of the first chapter (okay, it was only three pages), before I realized it was all exposition about Maggie’s past while she is on the road to her new home. Her writing style is so fluid and fun I wasn’t the least bored and disinterested in what was going on. That ability can’t be natural. If it is, I might end up hating her despite her fabulous books.

I love the way Maggie and Luke interact from her deciding the buttoned up banker couldn’t possibly be capable of fixing her easel, and his misconceptions, to their slow friendship and the way they keep saving each other from awkward situations (ie, his former fiancée’s sister who is determined to catch Luke now). I also love how just in the first seventeen pages we go from ready to hate her grandparents for ignoring Maggie all of her life, to thinking there must be something much more there.

And I love this bit on page 81, where she talks about how she’s generally afraid of romantic relationships because of what happened to her mom. But, she says that if she gets any more comfortable with him, she’s going to start seeing china patterns. His response:

The characterization, dialogue and plot were so interesting I stayed up way into the wee hours of the morning reading this book. I really can’t wait until her next one comes out.