Ever since Joyce DiPastena’s book “Loyalty’s Web” was chosen as a finalist for the Whitney Awards in 2007 for best historial fiction, I’ve wanted to read it. So when she offered me the chance to get a review copy if I blogged on it, I jumped at the chance–and I’m totally glad I did. First, the back-cover blurb: 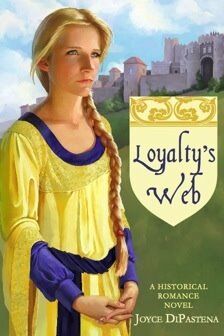 In Twelfth-century France, King Henry II of England has just finished crushing a rebellion by his power-hungry sons and now seeks to tame the lawless barons who supported them in this corner of his “Angevin empire.” To this end, the king has sent the Earl of Gunthar as his royal representative to ensure that Prince Richard and his former cohorts faithfully adhere to the terms of the peace treaty.
Far from being welcomed with open arms, Gunthar no sooner steps foot into the country of Poitou than he is greeted by a series of assassination attempts. All appear to be linked to the former rebellious prince through the agents of the family and friends of young Helene de Laurant. A clever, intrepid young woman, she realizes that the only way to prove her loved-ones’ innocence is by exposing the true assassin. Helene races against time–and dark secrets of the past–to unmask the killer before the kingdom plunges back into war.
Fierce determination gives way to mutual attration as Helene and Gunthar spar over the identity of the traitor. But their blinding magnetism almost causes them to overlook an even deadlier threat from an entirely unexpected direction.
I found Joyce’s book excellently plotted, with well-rounded, likable characters. The twists and turns along the journey kept me guessing right up to the end. She obviously did her research into the time period, but instead of feeling like she was showing off all of her knowledge, I felt immersed in the history and culture and the details felt like an organic part of the story. It was cleverly plotted, with a with an almost invisible writing style. Definitely two thumbs up!
To learn more about “Loyalty’s Web,” or to read about her new book “Illuminations of the Heart,” which is now available to purchase online at Deseret Book, check out Joyce’s Website, or her blog.