So the first and most important thing I can say about Tristi’s newest book is that I’m in the acknowledgments. Little ol’ me. Though honestly, there was very little Agent in Old Lace that needed help because Tristi Pinkston is such a great writer. 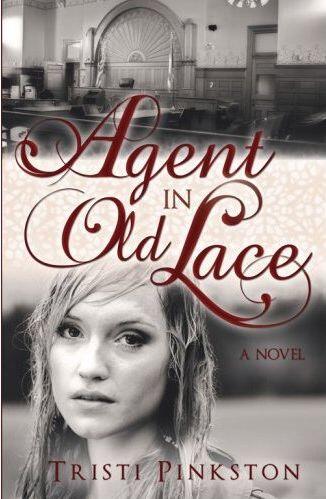 First: the back cover blurb:
Shannon Tanner has it all, a perfect family, perfect job, perfect boyfriend–or so she thinks. What Shannon doesn’t know is that her boyfriend, Mark, is stealing money from her father and making millions doing it. When Shannon learns Mark’s secret, he turns on her, and Shannon’s life abruptly goes from perfect to perilous.
In an effort to protect Shannon, the FBI assigns their only female agent to go undercover as her personal bodyguard. But when the agent gets injured the day before the assignment, they turn to the next best thing: their top agent, Rick Holden–in a dress.
Life seems safe again for Shannon with Rick by her side and Mark apparently gone for good. Then Shannon gets word that her best friend has been kidnapped, and it becomes clear that Mark isn’t going to stop any time soon. Shannon realizes the only way to save herself and her friend–and stop Mark once and for all–is by sending Rick, her only source of protection, away. Can Rick save Shannon before it’s too late?
The book is a great mix of intrique, romance, and action. The characters are well fleshed out, the dialogue believable, and the story flow is great. If you haven’t read anything of Tristi’s before, check her other books out on her Website, or learn more on her blog. She also has a great new cozy mystery series starting next fall with Secret Sisters–a hilarious tale of old ladies determined to solve crimes, regardless of what the police have to say about it.
Anyway, I digress. Because I enjoyed Agent in Old Lace so much, I thought it would be interesting to interview Shannon and see what she had to say about her harrowing experiences.
Me: So, Shannon, what’s it like to have your story in print?
ST: Well, I was really worried at first, I mean, what if the writer didn’t tell the story right? What if she embellished or forgot something important? But then I read Tristi’s book Season of Sacrifice about her pioneer anscestors and I just knew she was the one.
Me: Do you know the difference between a clip and a magazine? Tristi said she needed help with that.
ST: Of course, doesn’t everybody? A magazine has words and pictures on it and is printed up so you can read it. A clip goes in your hair to hold it back.
Me: I wonder why Tristi had so many problems with that. Hmm, anyway, Rick sounds like he’s totally hot. Does the man have any faults?
ST: Well, he refused to shave his legs, and then complained incessantly about the panty hose itching. Oh, maybe I should have said that. I asked Tristi to leave it out of the book.
Me: So he didn’t continue to wear them after he was able to dress as a man again?
ST: No, he’s plenty secure enough to do so if he ever had to again, but he claims they didn’t do a thing to make his legs look better. I have to agree.
Me: I was so glad to read that your dad recovered from his poisoning. What have he and your mom done with all of that money?
ST: He decided to retire and they are traveling the world hitting every Disney World on the planet. He’s also obsessed with eating a burger at McDonalds in every country that has one. China has been his favorite–so far.
Me: Wow, well after everything he went through, he definitely deserved a vacation. And what about you and Rick?
ST: We’re going to live happily ever after of course, with 5 kids, a minivan, soccer, piano and Scout meetings. I promised him, however, that I would never make green Jell-o with carrot shavings in it.
Me: That’s great. Well, thanks for appearing on my blog today. And good luck in your min-van shopping. It can be dangerous!
ST: You’re not kidding. the last dealership we went to had to be threatened before they would let us leave the building. It’s a good thing Rick packs heat.
Agent in Old Lace can be purchased here. It is currently sold out on Amazon, but should be back in stock soon.