Okay, yes, I’m fully aware that this book came out like two years ago, and I’ve been meaning to read it ever since, but I finally got to it (my to-read stack is horrifically tall). I still remember the 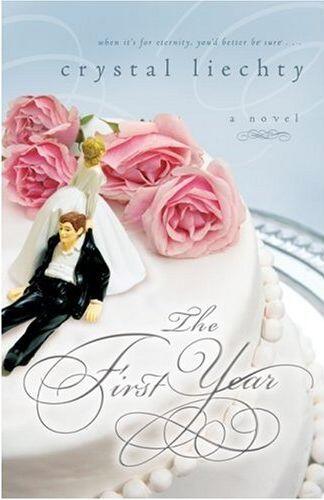 Storymaker’s conference where Crystal read part of her opening scene at Boot Camp. It was probably for the dialogue bit, as that scene has really smashing dialogue. I smiled when I read, “Taffeta, taffeta, taffeta.”

Anyway, so here’s the low-down: Beth has been married to Mike about six months when the book opens. She’s got a great life, married her sweetheart, and is determinedly NOT thinking about the ex-boyfriend, Charlie, who cheated on her and then left for the Marines. Then Charlie returns home, and he wants her back.

Every time she turns around, there he is, insisting that she still loves him, and that she only married Mike to hide from him. After a while, she starts to wonder if it’s true. Her two bffs struggle in their new marriages, deal with in-laws and spouses, her sister moves in with a boyfriend and learns she pregnant, and Beth feels like life’s falling in pieces around her.

Then she catches Mike in a truth-shattering lie and she wonders if she made a huge mistake.
I love these characters, they’re so thoroughly flawed, but still likeable. I like the way Crystal broke up the action with little scenes between Beth and her shrink, which added a fun dimension and showed the reader so much about the character.
Life isn’t always pretty. It’s messy and stressful and confusing–and the first year of marriage is no exception.
Fun story, great characters, and a satisfying ending, all wrapped in together. I can’t wait to see what she comes up with next (and I do believe she’s got something else coming out soon.)