I was really excited to attend The Whitney Awards last month, and to meet some great authors (Seeing Jeff Savage dressed up as Stephanie Meyers was pretty fun too.). I’m afraid I didn’t get to meet Aubrey 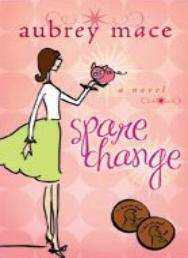 Mace, but as I had just purchased her book Spare Change, I was excited to get reading it after she won the award for Best Romance. The back cover blurb says:

New Year’s resolutions are one of Riley’s least favorite things – until this year.
Twenty-three and single, Riley thinks resolutions should be fun, not hard. Just before midnight, she vows to make the easiest resolution ever: save her pennies and at the end of the year, buy something nice for herself. Easy! …Or is it?
Working at a cancer treatment center can change one’s perspective, and before long Riley decides to donate her extra money to cancer research rather than reward herself. At first her resolution is her own secret, but all too soon the nurses figure out her plan, and then things really begin to get out of hand!
As people through the hospital, and then the town, begin to get involved, Riley finds herself at the front of the fund-raising campaign. She also finds herself face-to-face with Paul, the grouchy but cute bank teller. But can she overcome the memory of a failed relationship – and can he do the same? And who is the secret admirer who keeps leaving pennies and notes for her to find?
Aside from a million pennies, every flavor of ice cream imaginable, and maybe even love, Riley is about to discover that an ordinary person can be the catalyst for extraordinary events.
I really enjoyed this book. The characters were well-rounded and beautifully flawed. Yes, beautifully flawed. Do you have any idea how hard it is to give your characters really believable flaws, but still make them likeable? The other side of things is to not give them enough flaws so they end up seeming just a little too perfect. We’ll just say Aubrey doesn’t have this problem.
I love how the office Riley works at is so obsessed with ice cream–and that her favorite wasn’t some variety of chocolate. I love the back-and-forth banter between her and Paul, and how they finally decide to bury the hatchet instead of arguing over little things. And I love the message that even little nobodies can do something spectacular if they put their minds to it. We’re not nobody–no matter how much it may feel that way sometimes, and we can accomplish great things.
I wish I had written down all of the funny little lines that had me laughing out loud (while I was on the treadmill at the gym, mind you. I’ve long since given up on worrying about funny looks).
If you haven’t read this yet, go find a copy and check it out. I’m looking forward to reading My Fairy Grandmother soon–also by Aubrey.