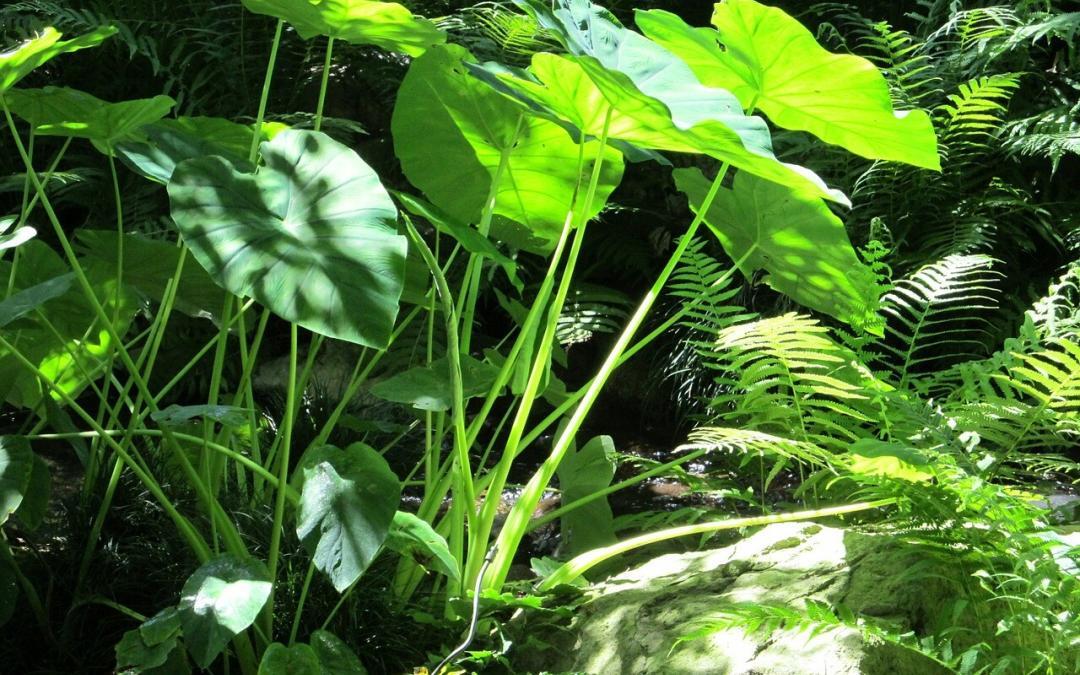 Another of my favorite indoor plants is the elephant ear, which is also known as taro. This plant is a perennial in zones 8 or warmer with the use of mulch to protect it from the cold, but is often planted in colder areas in the spring to provide great green spots in the yard. In warmer areas like Florida, be aware this plant can turn invasive, so take measures to keep it in its place.

This member of the caladium family is also often used as a house plant. I have a large pot of this in my living room, in fact. This plant prefers partial shade, and thrives in wet areas, making it ideal for marshy areas in the yard or near ponds–but mine gets watered on the same schedule as my other house plants and has survived when it has gone a couple of weeks in between waterings.

When grown in warmer, wetland areas where it doens’t die back in the winter, this plant will grow up to eight foot tall, and the large, heart-shaped leaves have been known to span three foot long and two foot wide. In northern areas, the maximum growth is usually more like two to three feet tall with smaller leaves. Still mine are often at least a foot long.

These plants need a lot of nutrients and should be given a high nitrogen fertilizer monthly. If you wish to overwhinter these plants in colder areas, you can wait for the vegetation to die back, then dig up the corms and store them in saw dust or similarmaterial in a cool garage or basement as you would a canna or calla lily bulb. Make sure the corms don’t dry out or mold from too much damp.

Before planting out the corms in your yard, it is best to dig the hole three to four times the size of the bulb and mix in plenty of organic matter. Every year after that, if you are leaving it in the ground, add a layer of organic matter as mulch around the base.

Used often to add texture to the garden beds, the most common cultivar of this plant, “Black Magic” has a solid green leaf. Other varieties are available however, including “Jet Black Wonder” which has a white veining pattern, and “Yellow Splash” which has a variagated leaf.

Another point in this plant’s favor is the fact that the corm is edible. In fact, it is an important food source in much of the world. The Hawaiians have been eating it for centuries in the form of ‘poi’. All parts of the plant can produce stomach irritation if it is not cooked properly, however, so take care when preparing it.