I’m constantly learning new plants and things about them. Last summer Keith Fisher from my critique group picked a stem of a perennial plant from his yard for me to identify. I had never seen it before, but luckily, Tristi Pinkston had. The plant that had been growing in a corner of his back yard since before he bought the house was comfrey. This anti-bacterial, anti-fungal plant has many medical uses and even makes a great fertilizer–more on that in a minute.

This native of Europe loves damp, gassy areas and is prolific in the British Isles along river banks. The plant is recognizable by it’s broad, hairy leaves and black, turnip-like root. It puts off bell shaped flower in white, pink, or purple. Some varieties will propagate from seed, while Blocking 14 won’t. This Russian cultivar was introduced in the 1950s and has grown quite popular. Root cuttings is the best way to propagate this variety, as well as many others. If one has a strong, mature plant, a gardener can use a spade to cut the green leaves off the top of the root sliding it horizontally about three inches below the soil surface. THis removes the crown and makes separating the offsets easy. They can then be replanted and will recover quickly.

New offsets should be planted in a weed free area with the root a couple of inches below the soil surface and the growing points just below the soil surface. The plants should be well watered while being established and should not be harvested the first season. Any flowering stems should be removed the first year so the plant can focus on establishing the root system. The plant is very nitrogen hungry and will benefit from applications of manure as mulch. It grows quickly and can be harvested four or five times a year when the stems grow to two feet in height. Because the hairs on the leaves and stems can be irritating to the skin, gloves should be worn when harvesting this plant, which should be done about two inches above the soil surface with shears or a sickle. Once established, this plant can be difficult to remove from an area because the roots go o deep and are nearly impossible to completely remove. 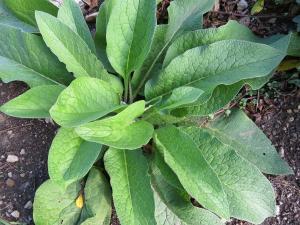 Image by Nancy Buron from Pixabay

Medicinally, comfrey can be used to reduce inflammation and swelling, it can be used to reduce pain, shrink blood vessels, stimulates the clotting of blood, cell growth, and expels mucus. It has been purported to speed bone healing and teeth strengthening, but should not be taken internally.

As fertilizer: Because the roots go so deep, they pull nutrients up from the subsoil. The plant uses a lot of nitrogen, but it doesn’t store it in the leaves, also, because the leaves are very non fibrous, they break down easily, releasing their nutrients back into the soil. This makes the plant a great choice for adding to nearly finished compost or even for row composting. It can be dug into the ground around potato hills, laid on the ground for a nutritious mulch that is especially great for plants that need potassium, placed in a water barrel for compost tea in a matter of weeks, used to activate a new compost pile–though it should not be used in quantity this way, or mixed with leaf mulch for a great potting mix.