Trial of the Heart, a great read

Every year my family makes a trip to Bear Lake on the Utah/Idaho border for a family reunion, and for the past two years I have taken along a book by Sierra St. James (along with several other books, of course). The first year it was What the Doctor Ordered which kept me in stitches for the entire read. Last year it was Masquerade–which is also a very funny read. 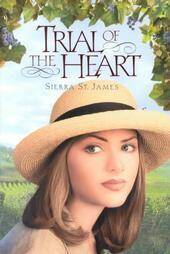 This year I had loaned my most recent Sierra St. James purchase to my sister and had to threaten her with bodily harm if she forgot to bring it with her—not that she was particularly afraid of me, but she found the book within hours of returning home from the Fourth of July weekend. And she read it in record time.

Trial of the Heart is a light, funny romance that kept me laughing from the first page. The main character, Jamie, is a college student who has taken a job cleaning homes to pay her college tuition—and the promise of seventeen dollars an hour was a significant lure, despite the crotchety Mrs. Walden, who made Jamie vacuum the baseboards three times because the old woman could tell by the sound of the vacuum that she hadn’t gotten all of the dust off of them.

After several weeks of working for the ailing woman, Jamie finds herself compelled to be kind to the woman, to try and show a Christ-like love that extends beyond simply not snapping back at complaints of invisible dusty particles she may have missed. As she extends the hand of friendship, her job gets easier, and Mrs. Walden begins to open up to her.

When Mrs. Walden dies, she leaves her vineyard to Jamie—causing a huge uproar in the family resulting in a suit to fight the will. When Mrs. Walden’s impossibly charming grandson gets involved, Jamie finds herself torn between the life he wants to live and what she has always wanted. Sierra St. James presents hilarious dialog and great characters.

Her books are lighthearted and sweet—a nice break from reality while still holding excellent values. I’m hoping she comes out with another women’s romance soon or I might be forced to borrow my niece’s books next year (she writes for young adults under her real name of Janette Rallison).