A lily to surprise the neighbors 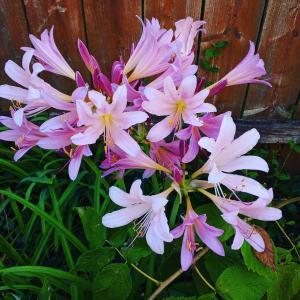 Image by clpk62 from Pixabay

In my previous home, I noticed these funny stalks growing up in a neighbor’s yard, but with no green foliage. The next thing I knew, they were covered in pink flowers. I actually wondered at first if they were fake because there were still no leaves anywhere on the plants. Later I learned what the plants were–and heard a humorous story about them.

This flower is called many things, Lycoris, Surprise Lily, Magic Lily, Blushing Lady, but most commonly it is called ‘Naked Lady’ because the leaves come out in early spring, hang around until early summer, then disappear for weeks before the blooms appear. My parents had one show up randomly in their yard several years ago.

My mom was trying to figure out if the gopher that had eaten most of the tulip bulbs had carried it from someone else’s yard–she hadn’t planted it. A few years later it came up half a dozen feet away from the previous spot. Again the gopher was hard at work. Apparently gophers aren’t too excited about this fun flower–which is good news if the pesky things have been eating everything else you’ve put in the ground. 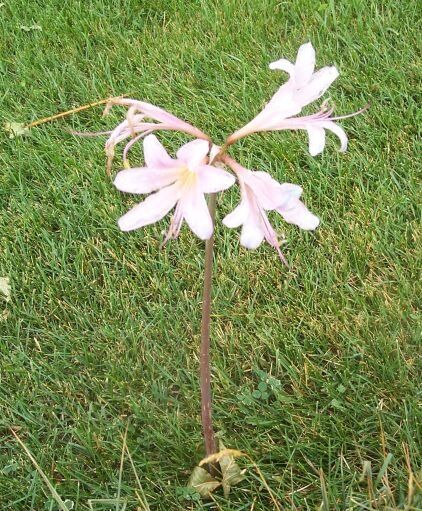 These are bulbs that grow 12 to 18 inches tall and love the sun. Parts of the plant can be poisonous. The plant requires moderate watering, but doesn’t like to be over-watered and it does well in soil with a pH from 5.6-8.5.

Propagation of this bulb comes from runners, splitting clumps, and rhizomes. It rarely sets seed, and when it does, the plants won’t come true to their parents.

The lilies do well from zones 5 to 11, covering a large part of the world. Other cultivars of this plant vary in hardiness and height, so make sure you are getting the right one for your area if you don’t live in zones 7-10. They are also available in colors from bright pink to pale pink, to apricot, to white.