Other people may see thirteen-year-old Marcus Kanenas as an outcast and a nobody, but he sees himself as a survivor and a dreamer. In fact, his favorite dream is of a world far away, a world where magic is as common as air, where 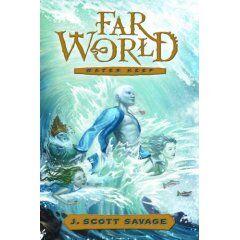 animals tell jokes and trees beg people to pick their fruit. He even has a name for this place—Farworld.

When Marcus magically travels to Farworld, he meets Kyja, a girl without magic in a world where spells, charms, and potions are everywhere, and Master Therapass, a master wizard who has kept a secret hidden for thirteen years, a secret that could change the fate of two worlds.

But the Dark Circle has learned of Master Therapass’s secret and their evil influence and power are growing. Farworld’s only hope is for Marcus and Kyja to find the mythical Elementals—water, land, air and fire—and convince them to open a drift between the worlds.

As Kyja and Marcus travel to Water Keep, they must face the worst the evil Dark Circle can throw at them—Summoners, who can command the living and the dead. Unmakers, invisible creatures that can destroy both body and soul; and dark mages known as Thrathkins S’Bae.

Along the way, Marcus and Kyja will discover the truth about their own heritage, the strength of their friendship, and the depths of their unique powers. When I learned J. Scott Savage was sending out ARCs of his book to people who were willing to review it on their blogs, I jumped at the chance.

I’m not the least bit disappointed.

The story gets moving quickly and keeps a steady pace throughout—hang on for a wild ride because the action only stops for a few quick breaths before picking up again. I’m one who doesn’t like a lot of description, I get lost in the words—and not in a good way. Scott’s descriptions, however, paint pictures without being bogged down with too many details. I could see the creatures and places as easily as if there were pictures on every page.

The characters are real and three-dimensional, and I liked and cared about them very quickly, instead of several chapters in after I finally had time to learn their quirks. I love how both Kyja and Marcus are fish out of water in the worlds they come from for different reasons, and that those things that make them different—Marcus’s physical disability and Kyja’s lack of magical ability—turn out to be advantages in some situations.

As Master Therapass says to them: “Sometimes the things we view as our biggest weaknesses turn out to be our greatest strengths. Don’t be too anxious to rid yourself o your burdens. Your burdens are what shape you.” This is something I’ve always believed.

This story is filled with messages about our individual worth, the value of helping others, and believing in yourself—but in a totally non-preachy way.

I look forward to seeing the next book in this exciting series, and expect to see this book rocket into popularity with parents and children alike.

In a few days I’ll post an interview with the author and give you a chance to win an advance reader’s copy of this book before you can buy one in stores. To read the first two chapters, click here. Go here to pre-order this book.

To be entered to win a copy of this book, post in my comment trail before July 20, then don’t forget to check back!