In my last blog, I discussed the importance of an over-all landscape plan before you begin to make changes. There are several reasons for this, but the most important reason is so you don’t have to redo some of the work later due to poor planning. 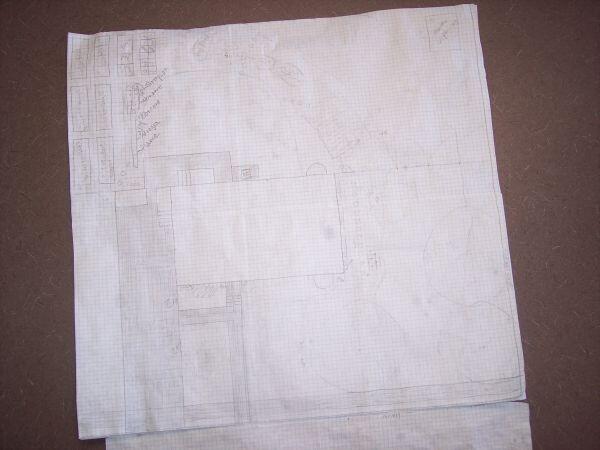 You can see my landscape plan, a plan I drew up early in 2007, and worked on over the course of several months. It’s light because I drew it all in pencil—much easier to make changes that way. I drew it on graph paper and used every 1/8th-inch square to represent one square foot in my yard. I measured out sidewalks, driveway, the house and walkways. It doesn’t have the precision of an architects rendering, by any means, and I have made a few changes in the yard that aren’t reflecting in the plan, but overall, it’s my map. The drive ways and sidewalks are the darker gray, the house is the big white block, and there are large circles representing trees and rectangles for garden beds. I even wrote out the name of the kinds of grapes I planted so I can remember which order they are in when I start to train them on the fence.

The front yard was fairly straight forward. Once I decided on the shape of the beds I was going to create, I just went for it and didn’t worry about the rest. The back is another thing altogether.

Last fall we had planned to build a flagstone patio out back. We considered all of the possible options: pavers, cement, stamped concrete with an acid wash, but what I really wanted was flagstones. I was thrilled to learn I could get flags from a local company for less money than having pavers shipped in—considerably less money, actually. It would have been least expensive to have a concrete pad poured, but with the cottage-garden feel to my yard, the pavers and concrete were not quite right and the stamped concrete was way out of my budget.

However, before I could start laying flags, I decided I needed to run a three-inch pipe under the patio. The plan was for it to be available if we needed to run irrigation under there some day or any other lines that I didn’t want to run around the patio and the pond I plan to put beyond it. Then my husband and I started to talk about water and electricity out where the birds are. We also want to build a garage/workshop for him in the back yard at some point down the road, so we decided we needed to open another trench running out there. And while it was open, we also ran a gas line—so there could be heat in the workshop.

This was a bigger hassle than I expected (any home repair or improvement is always more work than you expect–it’s like Netwon’s fifth law or something), and because of some unplanned expenses, we weren’t able to run the line or fill the trenches until this spring, but it was worth it, since I would rather go to the expense and hassle now, than to have to tear up our landscaping later.

Having a plan also made it clear which steps we need to take first, second, etc. Once again, we’ve put off the patio, because we want to add a free-standing pergola, and decided it would be best if the flags flowed into that space. So we wait while the money for the pergola adds up in our savings account, and hopefully we’ll be able to add it before the snow flies. That means the patio will be a year and a half later than I planned, but in the long run the hassle and expense will be worth it.

Your plan may not be nearly as detailed as mine, or on nearly as big of a scale. But if you want to add a tree, a few bushes and some flowers to a corner of your yard, it’s always worthwhile to be certain that you know what you’re starting with and where you want to go. More on things to consider before you dig coming up later.