If you discount snitching peas off the vine when I was a preschooler as actual gardening experience, you could say I first began gardening in my early elementary school years. The summer after I discovered Laura Ingalls Wilder’s Little House books, I was determined to grow my own food–just like a real-life pioneer. (Of course, at this time I wanted to be Laura Ingalls, in every way–an insane dream I fortunately grew out of.)

There was a patch of dirt my mom had used for veggies a few other times back behind their business, where we kids spent the long summer days. I know I planted peas, but don’t recall if I planted anything else. It’s a good thing peas have such a short growing season, because I remember becoming bored with all the weeding before they finished producing for the summer.

Over the next dozen years or so, I helped occasionally with my mom’s garden, (aka as little as possible) but it wasn’t until I owned my own little piece of earth (sort of) that I really took to the gardening bug. My husband and I had been married almost a year when we bought our first home–a single-wide trailer at the end of a small trailer park in Cedar City. If nothing else, that place was a lesson on the ‘joys’ of home ownership and the pitfalls of renting to others. But I digress.

Because the trailer was the last one in the park, I not only had a dime-sized plot of grass out front, but a spot of dirt between the trailer and back fence. Never one to do things by halves, I immediately began digging out the weeds, setting stepping stones, and planting flowers and veggies. After we added some garden lights to the yard, I could sit on the back steps and admire my handy work. It was so cool.

Since then, we’ve owned two new homes where I got to be in charge of all the landscape design. I’ve made my share of mistakes, but I’ve also learned plenty along the way and hope to be able to share some of that knowledge with you.

The prophets have urged us to grow some of our own food, then preserve it for our food storage. I admit my chickens, ducks and geese helped themselves to most of my veggies last summer, but my new fence ought to prevent that from happening again. I hope.

I got a slow start 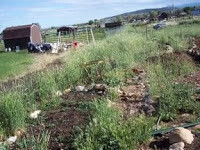 on my yard this year and hadn’t done much in the vegetable garden. You can see the before and after photos I took. I hauled about 150 gallons of weeds out of the garden area (in plastic tubs) but I’m not quite done. I also have a couple of beds that I haven’t finished building. Flowers are so much more fun than tending to vegetables that take months before you get to eat them. Cleaning out the vegetable garden and getting my veggies in was the top project on my list for this weekend.

Since I’ve been putting it off, I had to buy broccoli and cauliflower in addition 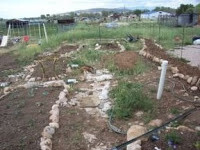 to my tomatoes, and it took a couple of stores before I found someone who still had onion sets. Other years I have started almost all of my plants from seed, but alas, I was a slacker. Memorial Day weekend is the traditional time to get our corn and beans planted here in Utah, so if you haven’t started yet, get out there and get things going. If you live much north of Utah, check your local frost dates before putting in more tender vegetables. This is one place that gives a first and last frost date in many areas, but other Web sites may have different listings.

Tip: I have massive airborne allergies to the wild rye that sprouts everywhere in my yard, and it is currently putting off pollen. I learned that hosing down the area where I wanted to work kept the pollen from bothering me, and I only had problems weeding around it when it got dry enough to start sending off pollen again. Try it if you have something in your yard giving you fits.