Last day to get promotional price on Breathtaking!

Thank you all for your support of this fabulous boxed set. This has been a fun ride and we’ve had so much support from friends and family helping us spread the word. The other authors are not only fabulous writers but amazing women I feel so privileged to have gotten to know. I hope those of you who have already purchased Breathtaking enjoyed each of the stories as much as I did. If you haven’t read it yet, today is the last day at the $.99 price. 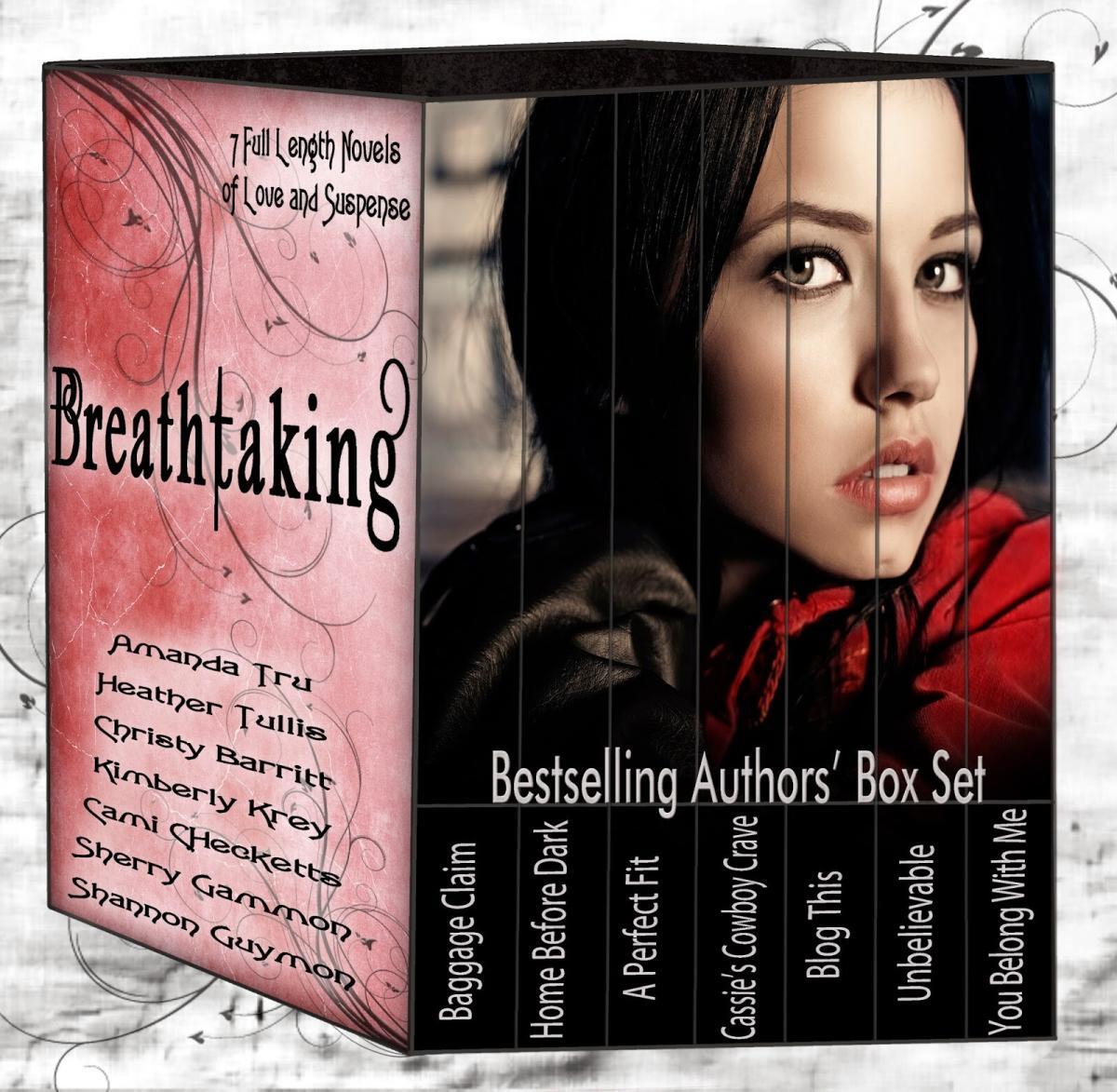 Unbelievable by Sherry Gammon
Deliah Dreser’s in town to take care of family business. They say the apple doesn’t fall far from the tree, but there’s more to Lilah than meets the eye. Cole’s in danger of losing his heart when this firestorm throws sparks his way. Is she simply playing him for the fool in order to exact revenge for her brother’s murders?
Bestselling author Sherry Gammon’s reviewers exclaim; “She has a gift for touching her readers with beautiful, gripping stories that you can’t put down.”

Home Before Dark by Christy Barritt
Nothing good ever happens after dark. Those were the words country singer Daleigh McDermott’s father always repeated.
Now her father is dead, and Daleigh finds a hidden journal hinting that his death was no accident. Small town mechanic Ryan Shields is the only one who seems to believe Daleigh. As the two work to unravel the mystery, it becomes obvious that someone wants them dead. They must rely on each other—and on God—if they hope to make it home before the darkness swallows them whole.
Award-Winning Suspense Novelist and Bestselling Amazon Author, touted as “scary, funny, passionate, and quirky” by USA Today.

Baggage Claim by Amanda Tru
Rachel Saunders is looking forward to her all-expense paid weekend trip to New York. But, when her luggage is lost and she is accosted by an infuriating Homeland Security agent, events take a dangerous turn.
Amanda Tru, Bestselling Amazon Author of Romance and Suspense. Discover the author who, as an Amazon reviewer raves, “continues to impress me and dominate my time with a book I can’t put down even after it’s ended.”

In a moment of weakness, Shane steals a kiss.
In return, Cassie steals his heart…
When Cassie is forced to join the witness protection program, she fears her life is over… but then she meets Shane Emerson — the hunky cowboy posing as her husband. Will this sham marriage turn into the real thing, or will a hidden danger put it all at risk?
Kimberly Krey writes romance that’s clean without losing the steam. What’s Beyond Forks calls this Best-selling Western Romance author “the master of romantic tension.”

A Perfect Fit by Heather Tullis
Cami DiCarlo is not happy when her father forces her into heading up guest services at his newest five-star hotel and unveils the existence of four half-sisters at the same time, insisting they live together while they launch the new resort.
When she meets Vince, the sweet, sexy landscaper her father would never have approved of, Cami can’t say no. If only she could be sure she is on the right track—and that they will be able to stop the person who is trying to destroy everything.

You Belong with Me by Shannon Guymon

Layla Kendall is a burned out social worker one step away from a major depression. When she and her sisters inherit their grandmother’s bakery, she doesn’t know if she can trust her good fortune or not. But the chance to be with her sisters and get away from the heartache and pain she’s faced day in and day out is a chance she’s going to take. With Layla’s new life, come new friendships, including Michael Bender, a single dad. She doesn’t trust men but Michael’s little girl grabs her by the heart and won’t let go.
Shannon Guymon is an Amazon Bestselling Author of lighthearted and clean romance who according to her many fans, has the ability to paint pictures of her characters so real that readers would know them if they saw them walking down the street.

Blog This by Cami Checketts

Devastated by the loss of her brother, Natasha Senecot exposes the dangers of Matthew Chrysler’s violent video games, bankrupting and humiliating him. Chrysler sends a hit man after her. In a race against time, can Natasha expose Chrysler before his assassin murders her family and shatters her world?
Bestselling author Cami Checketts has been touted as, “A genius! She writes about topics that aren’t widely discussed, and she does such a brilliant job of crafting these things into wonderful stories that touch your heart and remain with you for days afterwards.”