In the summer of 1983, a young Marine knocked on the door of Chaplain Bird. His face was ashen and his eyes wide with fear. He had just come up positive for the second time on a drug test and now faced 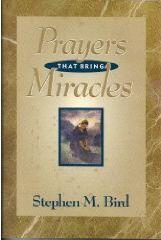 certain demotion to the lowest rank, two months in the brig, and a dishonorable discharge.

The Marine explained that he was innocent and that there must have been some mistake. He went on to say that he had recently married a woman with five children. The family was living in military housing and his wife was currently receiving treatment at the base hospital for bone cancer. If he were kicked out of the Corps, his family would have no home or income.

As he listened to the young man’s story, Chaplain Bird began to pray. After the Marine finished, the chaplain heard Heavenly Father say, “I’m the only one who can help him now.”

This began a spiritual adventure for both the Marine and Chaplain Bird. As they talked, prayed, and read form the scriptures Brother Bird felt impressed to teach this young man how to pray. A few days later the Marine returned to Brother Bird’s office saying, “Chaplain, you’ll never believe what happened.”

The result of their prayer together was so remarkable that Brother Bird began to share the story with other Marines. Virtually all those who learned and used the same principles of prayer as this young Marine came back to report their own personal miracles.

There are lots of books about prayer on the market today, but even if you already have another one, this book is well worth reading. In the first chapter the author tells the story mentioned above, and lists the scriptures that he felt guided to read with the Marine. In following chapters he discusses each scripture and tells more stories to illustrate them. The book is engaging and definitely inspired. I can open this book to any page and feel the spirit of truth in them. I know I’ll read it again and again.

This book can be purchased at Amazon.com.