Since I grew up in the Manti Temple District and have several ancestors who helped build the temple, I was really excited to see that Annette 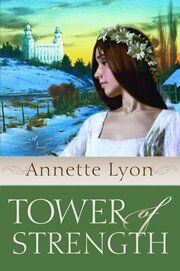 Lyon was working on a book taking place during the time it was built. Since I have read several of Annette’s books, I knew I would not be disappointed in Tower of Strength, and I wasn’t.

Tabitha is a young widow whose marriage lasted only weeks before she lost her husband in a mining accident. She moved away from home shortly after her son was born, and hasn’t been back in the years since. When she is offered the chance to buy the newspaper in Manti, however, it is an opportunity too good to pass up.

As Samuel helps Tabitha with an injured horse, and through an investigation she pursues in the interest of the truth, which endangers her livelihood, they grow together.

This is a great story with well rounded, believable characters who suck you in from the first page. I admit, I cried more than once, I was so into the life of the characters and what they were experiencing.

Annette has obviously done plenty of research as she describes the ins and outs of life in the 1880s while making it feel organic and not forced. And I love her description, which is such a hard thing to do right (if you are me).

To learn more about Annette and her book, visit her blog or her website.