Spider Plants Love to Hang Out 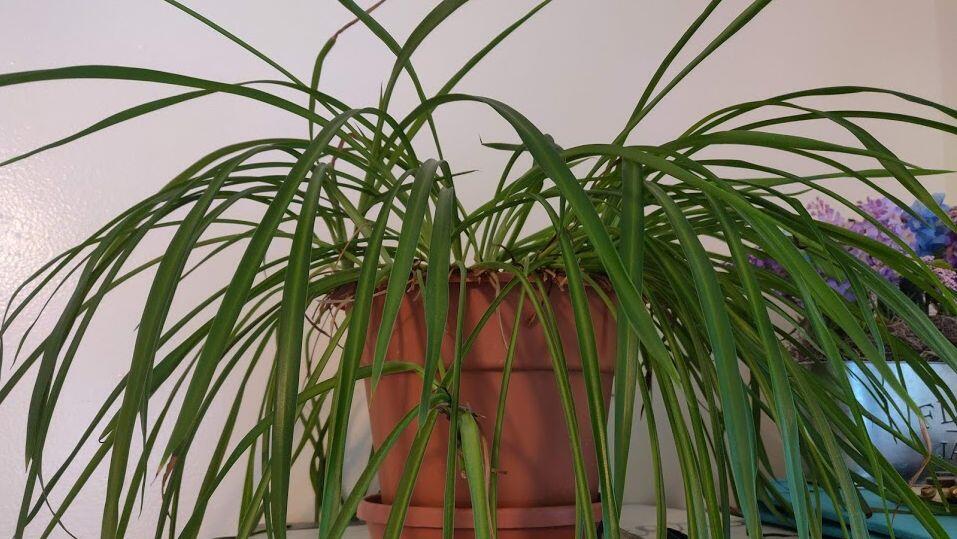 Another of my favorite house plants is the spider plant. I actually have two of these: one is a variegated leaf-variety, and one is a solid green color. Like the philodendron, this popular house plant is extremely hardy, prefers to be out of direct sunlight, and is very simple to propagate.

These grow quickly to 2-2 1/2 foot wide and 2-3 foot long if in a hanging basket. I have mine on top of a display cabinet in my living room and the stems flow over the corner, softening the edges. These do best with a thorough watering every week, but I have gone at least three weeks at a stretch at my house when I’ve been especially distracted. They bounce back quickly. They really need to dry out for a day or so between watering, so a weekly regime in all but the hottest indoor locations is ideal.

The Chlorophytum comosum or “airplane plant” puts out long stems from the main plant. These produce tiny white flowers which turn into little plantlets. If you let these plantlets touch dirt, they will root and can be easily detached from the main stem. If you have a bit of rooting hormone and can be diligent about keeping the dirt damp, you can remove them from the mother plant first, but I perfer to keep them attached until roots are developing. Once this is accomplished, simply cut the long stem away as close to the plant as possible with a sharp knife.

Spiders rarely have problems when kept indoors (they can be planted outdoors ina shady area during wrmer months if you like) but over or under watering, spider mites and whiteflies, scale and aphids can cause problems, so it’s best to keep an eye out.

Two problems can be caused by watering habits. One is root rot, caused by insufficient drainage, or too frequent watering. In many cases this is shown by the plant dying from the center out. If your leaf tips begin to brown you should check to see if you are fertilizing with too high of a concentration, if there are excess salts in the water you are using, or even if you aren’t watering often enough.

Spider plants have thick tuberous roots and can be separated at any time of the year. These roots are actually capable of breaking the pot the plant is in, so it doesn’t hurt to check them periodically. Do not fertilize for up to four months after repotting. The offshoots with plantlets usually are formed during the fall when the hours of sunlight begin to decline. these plantlets can be potted up any time of years.

This native of Africa is often grown in rocks instead of dirt. When the roots begin to appear above the soil surface it is easy to split and re-pot the plant.