As I search for different plants to try out in my yard, I’m always on the lookout for something unusual to add interest. my first summer in this house, some of that interest came in the form of a contorted filbert. This member of the hazel family qualifies as a bush or shrub because it puts out several stems from ground level instead of shooting out a single trunk. It grows easily to five or six feet and about as wide, though in some areas it has been known to grow up to fifteen feet tall. It responds well to pruning, so don’t be afraid to get in there and trim it back if you need to.

I admit, I paid more for this one shrub than I normally would have considered, but it was exactly the thing for that triangular bed in my front yard. The contorted filbert, also knows as Harry Lauder’s walkingstick or corkscrew hazel, has twisted gnarled stems, and even the leaves are twisted–at first I thought an aphid had gotten to the plant, but that’s the way they always grow. It fills out with leaves really nicely through the summer, then when they fall off, the stems are exposed to add interest to the landscape through the winter. It also puts out ‘blooms’ in the spring, consisting of worm-like yellow or bronze/brown flowers that appear before the first leaves. However, the plants must be grafted, the flowers are either sterile or will not reproduce a true copy of the parent stock. 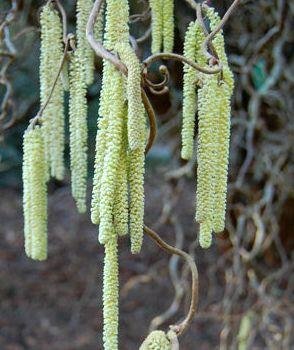 A lover of full sun, this filbert prefers zones 4-9. The plant prefers slightly acidic ground, though my dirt is quite alkali, and my plant is doing well. It can also be grown indoors.

Most plants you can buy have been grafted onto a normal filbert root, and the roots tend to send up shoots, which means you have to watch and keep it trimmed back if you don’t want the straight stems to take over. You can see this in the picture below. A basic pair of pruners will keep the suckers under control.

It’s important to make sure you water this shrub deeply and often, as with any shrubs and trees, but especially during the first year until it gets properly established.

One caveat: the contorted filbert is susceptible to Eastern Filbert Blight, which is a rampant fungus in many of the northeastern states, but has been spreading to other regions. You should contact your local extension office for particulars if you are concerned about EFB. If your plant has flagging branches in the summer or winter canker, the affected branches should be pruned off at least two feet below the signs of canker and then burned or chipped as any moisture left in the stems will allow the fungus to continue growing. Affected plants can also be treated with a fungicide to new shoots in the spring.