New from my kitchen: baking with natural yeast

It’s been a busy spring with more craziness coming as summer really gets into gear. As I turned over all of the  LDStorymakers conference responsibilities to the new co-chairs, I’ve been working to turn over a new leaf in my own life–eating healthier. I’ve decided not to go into the whole thing in one leap, though–realistically changing my eating and exercise habits all at once will never work, but I’ve been planting a more extensive garden this summer (if not as big as I had originally hoped), and I’ve started cooking with natural yeast.

I didn’t really know what natural yeast was before last month, but after hearing many of the benefits extolled, I decided to give it a whirl. Caleb Warnock (who I’ve known since my newspaper days, which makes it nearly a decade now) and Melissa Richardson recently published a book titled The Art of Baking With Natural Yeast.

Natural yeast is what they use in sour dough and artisian breads. Until the mid 1900s, it’s what most bread products were made with. It’s pretty easy to use and not all strains are sour.

Melissa came to my local International Permaculture Day celebration on May 4th, bringing yeast starts and selling copies of her books. I took a (non-sour) start home and started reading up on how to feed it. If you’ve ever had a start for Amish Friendship Bread, then you’re familiar with how this works. Every three days or so I use part of my start, and then I add 1 part start, 1 part flour and 1 part water, mix it well and store it in the refrigerator for a few days. I check it every time I open the fridge, and sometimes (if my hubby cooks or we eat out) I open it just to check on the start. It start to bubble within a few hours and can double in size, though mine has never gotten that big yet.

I built the start and got a feel for it for a couple of weeks before doing anything with it, then tried bread. I’ve made pancakes, waffles, and cinnamon rolls, and more bread.

And my hubby has never been so happy when he walks into a yeasty-smelling kitchen. 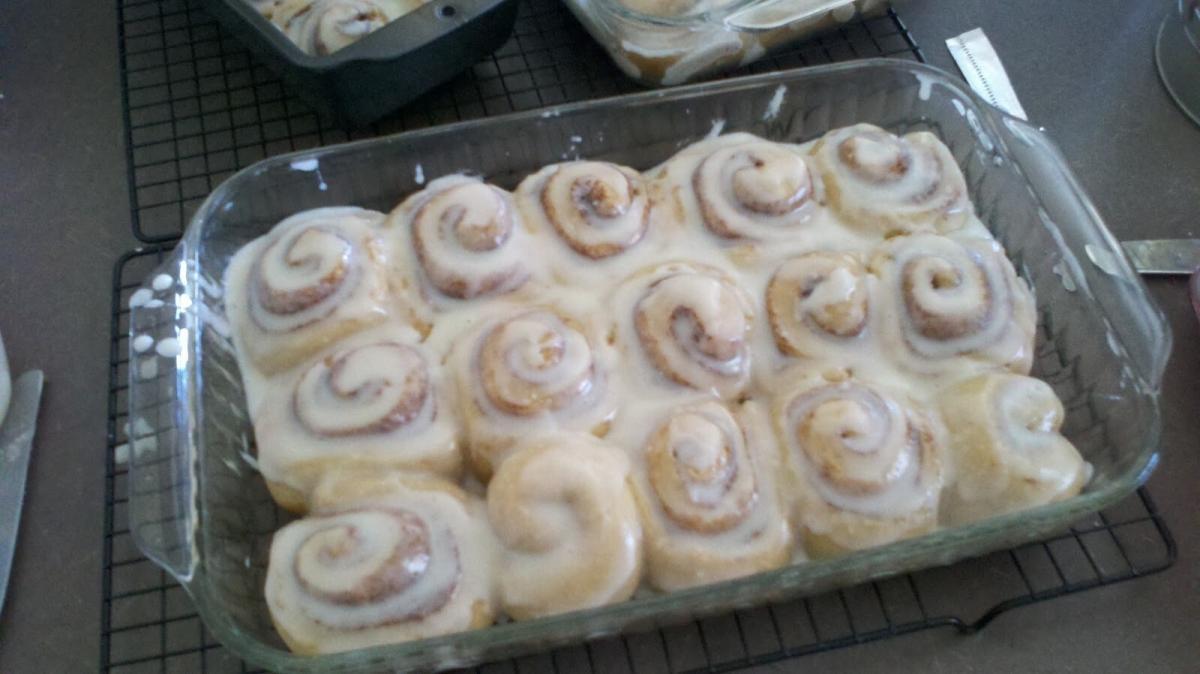 Here’s some of the cinnamon rolls I made last week. They were so fabulous! Melissa’s recipe is for whole wheat rolls, and includes some mashed potato to make the recipe lighter if you’re using all whole wheat. It turns out my whole wheat flour has gone rancid–yes, that’s how long it’s been since I did any serious baking. So I made this with all white and didn’t bother with the mashed potato, but next time I’m going to try at least part whole wheat–as soon as I buy some more flour. (A decent grain mill in on my to-purchase list for late this summer.)

Natural yeast has lots of good things for your stomach and is good for your digestion. Some people who’ve suffered from acid reflux have reported that eating products using natural yeast on a regular basis have eliminated their problems (ask Caleb Warnock about this sometime). We’re hoping it works for my hubby.  Also, letting the yeast work on the flour overnight (yes, it takes considerably longer to let it rise than store-bought yeast) helps make the flour more digestible, too.

Want to learn more? Check out Melissa’s blog at http://thebreadgeek.blogspot.com. Get their book, and Caleb will be happy to send you some natural yeast flakes so you can grow your own start, or if you live near me (or might be seeing me soon), contact me and I’ll share some of my start.

I think my next baking project will be to test Melissa’s cake recipe. I’m a big fan of cake and can’t wait to see if I can tweak it for other flavors. =)