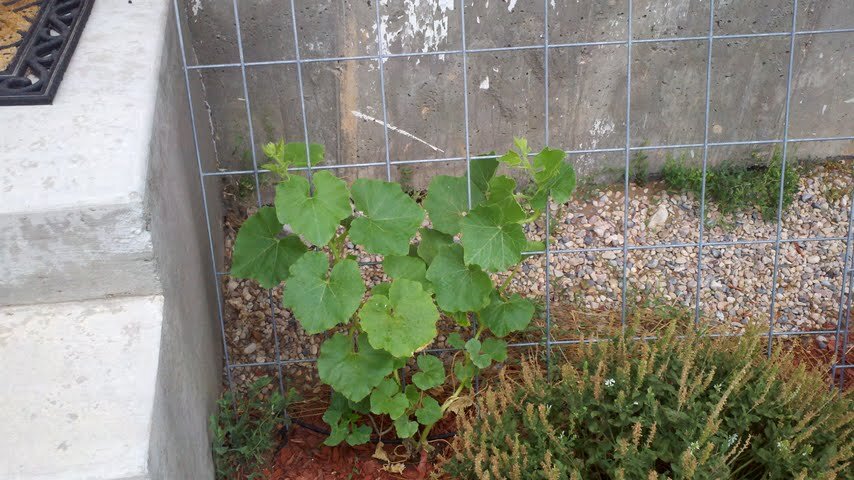 I know it’s been a long time since I wrote about my garden, but I’m turning over a new leaf. Well, okay, I’m working on it. For the past five years I’ve been planning to trellis some vines on the front of the house. Originally I thought maybe morning glory (the good kind, not field bindweed) or maybe clematis. Unfortunately, I wasn’t sure what the best trellis material would be for my nearly non-existent budget. This winter, however, I had a new idea. Cattle panels.

Cattle panels come about four foot tall and sixteen foot long, they are a heavy-gauge wire that doesn’t bend easily so they stay stiff and the price is reasonable. I think I paid about $22 each for mine. You can buy them at feed stores like IFA or Cal Ranch. I took along a pair of bolt cutters and a measuring tape when I bought my panels and the nice guys at Cal Ranch cut the panels where I asked them to. I did this not only because they fit better on the back of my truck, but because I was going to cut them to put them against the house anyway, eight foot is plenty long enough to cover the stone on the south side. 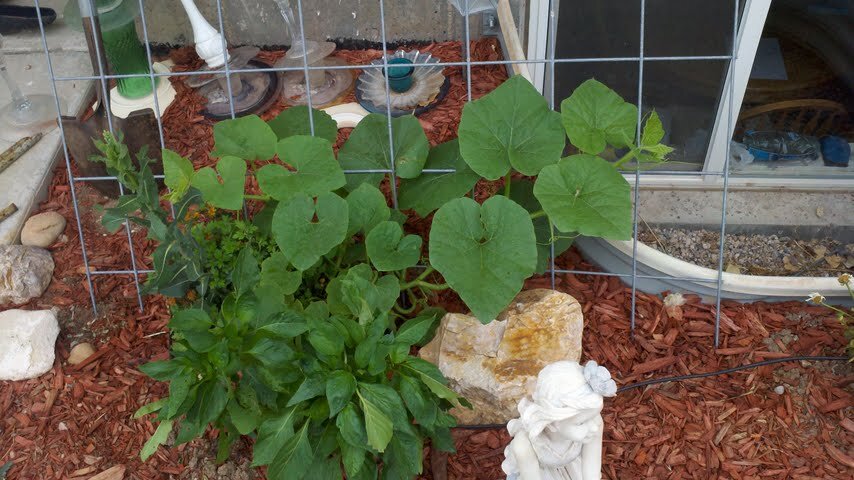 Once I finally had them up, I made a trip to my local nursery and picked up some squash plants. I got a watermelon plant, some winter squash (blue and orange) and…some other vining squash (I can’t remember off-hand. because I’m a slacker and didn’t write it all down.). I also have a big, healthy grape plant I picked up locally that I planted on the panels. I interspersed the grapes and squash with vining green beans for their nitrogen-fixing abilities (only a few of which survived the heat and insects) and put a soaker hose along the edge to water everything. I still need to go in and attach the panels to my house before winter, right now they’re just leaning against it. Though there’s enough of an angle that they aren’t likely to be blown over, I don’t want to take the chance of killing my grape vine.

If I’d seeded these in late March like I had planned, they would be much bigger than this by now, but they’ve only been in the ground for a few weeks, and the hot, hot temperatures (and nasty dry wind we were dealing with up until the week of the Fourth) made it difficult for the plants to acclimate. They are definitely putting on lots of growth now though, and I’m hoping for a nice crop. You may think watermelon and winter squash sound like bad, bad ideas for trellising, but with a little support when they start to get big, they’ll do just fine, and they’ll help keep my house cooler in the summer sun. Next year I’ll add more perennial vines.

I know March is early to start planting, but protected on the south side of the house, I figure the plants will come up when they’re ready and it gives the root system a much better chance of survival if they get in the ground earlier.

Next week my local permaculture guild is coming over to build a huglekulture bed in my back yard. I promise to take lots of pictures!