Man down, unknown problem is one of the most common things we hear over the pager. Often this happens in a public setting where someone is passing through town (especially at a gas station), but sometimes we get it at a residence as well. Too often these patients have no history of medical problems, or no one around them is aware of their medical history. In my area there are a few things we automatically start thinking when we hear this. First: heart attack. Second: low blood sugar. Third: drug overdose.

Here’s the thing: People tend to freak out when they find someone unconscious lying around, especially if it’s a family member, so we never know if the patient is “having trouble breathing” as reported by dispatch, or is actually dead (yes, we have responded to homes where they report that the person is not breathing very well, and they’ve been dead for hours). So there are several things we take in with us at the scene.

First and always is the portable oxygen tank. Pretty much every patient gets oxygen–it never hurts, and often makes patients feel better even if it isn’t related to the problem.

Second in this scenario is the IV kit. IV access is critical in a situation like this because chances are we’re going to want to push medication of some kind. If it’s a heart attack, we give heart stimulants, if it’s a low blood sugar problem, we’re going to want to give glucose, and if it’s a drug overdose, we’ll want to give Narcan. Before we start giving fluids or medications, though, the person in charge of the IV is going to get blood samples so the lab techs can get them running as soon as we arrive at the ER without having to start a new IV site. The one pictured below is fairly typical and will hold a bad of fluid and the tubing we need when we start an IV. 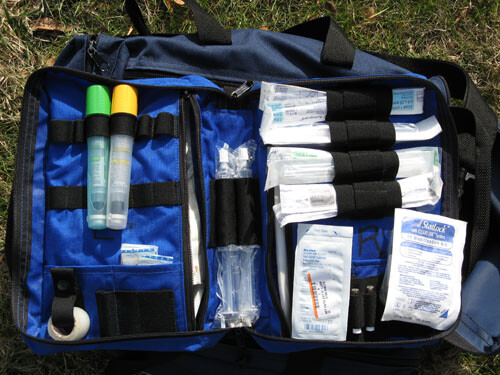 Third is the blood glucose tester, which will help us identify or rule out a diabetic problem. There are tons of different brands out there, but we carry a simple unit similar to this, though I don’t know what brand, off hand: 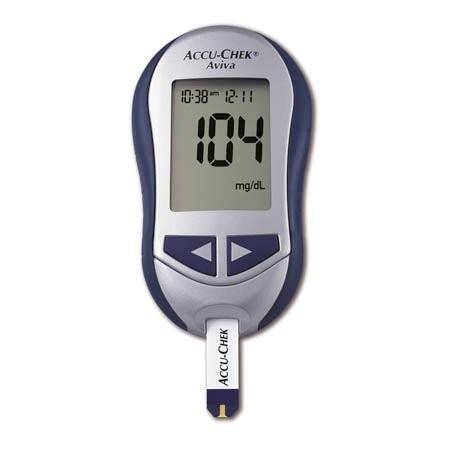 Fourth is suction. We have portable suction units that are great if we have a patient who has something in their airway (like vomit or other fluids–common problems if we end up doing CPR.) There are a lot of different suction units available, this is one kind: 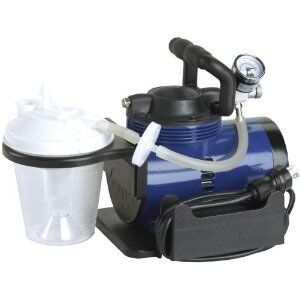 Fifth is the AED. AED stands for Automated External Defibrillator–this has the blood pressure cuff, an oxygen sensor for your finger tip that also give us a pulse reading, a set of five ‘leads’ that we put on various positions on the chest so we can get an accurate reading of heart activity, or a couple of electrode pads (aka AED or defibrillator electrode pads) that will also give us a basic heart rhythm, and can provide a shock if the person is having a heart attack. We carry a couple of different brands in our department, the one pictured below is one of them, though it’s a newer model than the one we carry. Many businesses and public offices have scaled down versions that just have the shock pads. 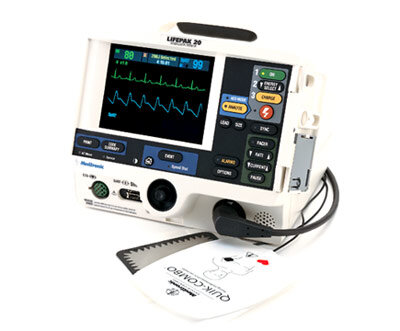 The sixth thing we bring is the ALS kit. ALS stands for Advance Life Support. Our ALS kit is a big, heavy, yellow plastic case that holds all of our medications, plus some airway equipment in case the patient isn’t breathing well on their own.

So first thing we do after we arrive is check to make sure the patient is breathing okay, and we put on the oxygen mask. The standard dosage for oxygen is 15 liters per minute for an adult. A second person is going to put on the blood pressure cuff and oxygen sensor to get some baseline information. The third person is going to do a blood sugar check.

Once we’ve determined the blood sugar is okay, and the heart and breathing are fine, we’re going to push Narcan through the IV–this can be given through an injection into the arm (either subQ–subcutaneous, which means into the fat layer below the skin–or IM, which stands for Intra-muscular, which means into the muscle) but is much more effective when given via IV. Narcan is a narcotic antagonist–this is the generic term for any of the medications that do this job, our department carries Naloxone. What this does is neutralize or counteract any narcotics the person might have in their system.

If you give it and they don’t have any narcotics in their system, it won’t hurt them at all, but if they have been taking narcotics, it will counteract it, often within seconds. And if the patient just paid big money for that high, they often come out of it ready to throw punches, so we generally try to give this slowly.

Of course, we don’t want to spend very long at the scene, so we try and do this as quickly as possible, but may not start giving medications until they are already in the ambulance.

If none of these things brings any improvement in the patient, the ER staff will start looking for other causes, but eliminating these three things before the patient arrives at the hospital gives the a good starting point for looking at other problems.

Remember my department runs Intermediate EMTs, which in Utah have the protocols to give IVs and medication. If your character is in a small town with only Basic EMTs, they would still get the blood pressure and oxygen levels and take the blood sugar, but would be unable to do an IV or give medications. If they lived near a bigger city a rig with Paramedics may intercept before they reach the hospital and a paramedic would jump in and start the IV and do medications. They may even arrive before the first ambulance gets the patient loaded, it just depends on location. Generally areas with fewer than 30K residents will not have Paramedics, though this can vary. If you have a question about the location you’re writing about, call up the local ambulance department and find out how things work there. If your location is imaginary, call a department in the general vicinity for a community the size of the one you made up.

As always, my medical column is intended only as basic information for writers, not as medical advice for anyone. If you have a personal medical question, ask a doctor.