Michael Young is a newbie to the publishing scene, and his new book “The Canticle Kingdom” hit store shelves earlier this year. Michael is a recent graduate of BYU and is married with a little boy. I found this YA adventure story filled with action, danger, and surprises around every turn. The descriptions are beautiful and evocative. The story 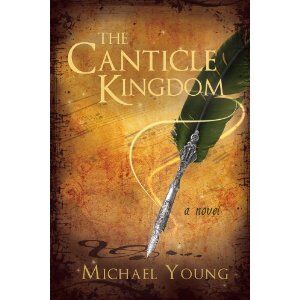 is written in two worlds with the story of the world inside the music box being peppered with scenes from the 1940s and the history of the box itself, which I found a bit distracting. Still this is a promising beginning for an inventive new author.

It seemed like ages since Kate’s father went off to war, and she is eager to thank him for the beautiful German music box he sent for her birthday. But when it starts playing a strange, new melody and Kate vanishes into thin air, Captain Edison is willing to do anything to rescue his little girl.

When the Canticle Kingdom is attacked and the queen falls deathly ill, Joann, a young blacksmith’s apprentice, learns a terrible secret – the kingdom is contained entirely within a music box in another world.. With the help pf his friends, Johann races to bring aid from that other world in an effort to stop the dark power that threatens to destroy them all.

Enter a beautiful world full of magic, danger, loyalty, and bravery in The Canticle Kingdom, and discover that even the most ordinary objects and people might be hiding something truly wonderful inside.

You can learn more about this author, read sample chapters, and check out the free music box melodies he has posted on his website.