Book review: “The Sharp Edge of a Knife” by D.N. Giles and Giveaway!

Do you have an interesting family story? One that is bound to captivate not just those related to the person it happened to, but lots of other people as well? The Sharp Edge of a Knife is one of those stories–it’ll catch you from the first and keep you on the edge of your seat. First the blurb: 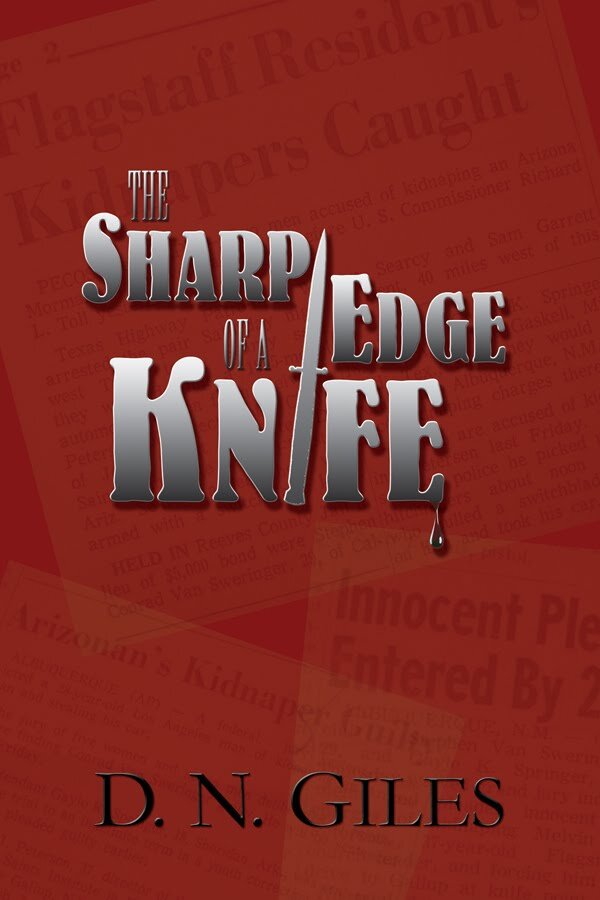 Most people would have panicked, sitting bound and gagged on a boulder in the middle of the desert as I was, but for some reason, I didn’t. A strange kind of reassurance washed over me from somewhere deep within. Whether it was peace that I’d go quickly, or comfort that I was being protected, I wasn’t sure.

When Mel Petersen leaves for work on the morning of February 7, he has no idea what awaits him. A few miles from his house, Mel picks up a pair of young men who appear to be college students, hoping to prevent them from having to walk in the cold. What Mel doesn’t know is that the men are actually convicts on the run from the law who are desperate to get away by any means necessary.

When one of his passengers holds a knife to Mel’s throat, he has no choice but to submit to the demands of the criminals. Mel hopes he has what it takes to talk his captors into letting him live so he can return to his wife and children, but fears they will kill him before he has the chance.

Based on a true story, The Sharp Edge of a Knife follows Mel and his captors on an unforgettable ride that will have you questioning the depth of your faith and sitting on the edge of your seat as it grabs your attention from the first sentence and keeps you riveted until the very end.

I admit, I am part of Nichole’s critique group and saw this book first nearly two years ago–and that wasn’t anywhere near the beginning of her journey to see this story in print. It’s an engrossing, captivating story about the actual experience her grandfather went through, pieced together through news articles, journal entries, and countless interviews.

The actual story is only about a hundred and twenty pages–short enough to finish in a couple of hours (completely unlike her fiction, but that’s another issue entirely). I found the whole story of Mel’s abduction and the thoughts running through his head, the way he clung to faith and prayer while trying to keep from getting killed, so fascinating. I love that she was able to track down one of the convicts and interview him over the phone, and the pictures of the actual newspaper articles of the abduction and trials add a great angle to the story. I highly recommend this book, and if you’re going to be in Provo on Saturday between 1 and 3, totally stop into Eborn Books at the Provo Town Center for her launch party–which is bound to be a blast (I’m so bummed I had a prior commitment!).

This book can also be purchased here, and is making its way into other stores as we speak.

Also, check out the giveaway she’s doing in conjunction with her blog tour:
The Sharp Edge of a Knife Blog Tour and Giveaway! To celebrate the release of The Sharp Edge of a Knife, D.N. Giles has put together an exciting giveaway, with several opportunities to win. Since the book deals a lot with making choices, the prizes all have something to do with choice.
Among prizes Nichole has been collecting, Lisa at Watches by Lisa has agreed to sponsor the giveaway by donating a custom made beaded watch and face. Head on over to her blog and take a look at the incredible selection.

So, choice number one: the winner gets to choose a watch band and face so that their watch is personalized to their tastes and fashion needs. Nichole realizes that a beaded watch is not exactly a prize to be coveted by a bunch of masculine men (though it makes a great gift for the woman or girl in your life), which is why she’s also giving away more great stuff. Check out the following really cool prizes: 1. Choice between: An autographed copy of the New York Times number one bestselling novel, Wings by Aprilynne Pike—or—a non-autographed copy of The Darwin Awards, Intelligent Design by Wendy Northcutt—or—a numbered, autographed copy of Recovering Charles by Jason F. Wright. Click here to learn more about Wings, here to read about The Darwin Awards, and here to find out about Recovering Charles. 2. Choice between: A $25 gift certificate to the Restaurant Morelia in Murray, UT (Sorry out-of-state peeps, this is local to Utah) or $25 worth of vinyl lettering by Whaddayawannasay Vinyl Lettering—you choose your quote or phrase. Bonus prize for author types 3. You may substitute any of the above selections with the following incredible opportunity: The chance to sit in on a critique session with my wonderful, amazing, incredible critique group. While there, you will be treated to not one, but six critiques on the first chapter of your work in progress. This is no ordinary group. We have in our midst some fabulous authors including Tristi Pinkston, acquisitions editor for Valor publishing and author of the Secret Sisters series, Danyelle Ferguson, freelance editor for Precision Editing Group and author of (dis)Abilities in the Gospel—who will edit via internet, since she actually lives in Kansas—Heather Justesen, author of The Ball’s In Her Court and the upcoming release, Rebound, Kimberly Job, author of I’ll Know You By Heart, and Keith Fisher, up and coming author of women’s fiction and plotting genius, and Nichole Giles, also known as D.N. Giles. **If enough people enter this contest, Nichole reserves the right to choose extra winners and give away some, or all, of the prizes left after the first three winners have made their choices. Entries will be accepted between March 15th and April 3rd. On April 5th Nichole will announce the contest winners on her blog. Entry requirements: 1. You must be a follower of both my blog and Nichole’s, which can be found here. 2. You must leave a comment telling me which prize you want to win and why. 3. For those wishing to win the watch, you must go to Watches by Lisa and become a follower, then come back and tell me which watch combination is your favorite. Extra entries: 1. Blog about this contest with a link back TO THIS BLOG, then come back and leave either a url address or a link in a comment s I can find it. 2. Twitter this contest, tell me where to see your tweet in a comment. 3. Follow me on Twitter. 4. Follow Nichole on Twitter.
5. Facebook the contest. If your Facebook page is private, and I’m not your friend, I can’t see that you’ve done this, so you’ll need to friend me and/or Nichole. 6. Become a fan of The Sharp Edge of a Knife on Facebook. You may enter this contest on any of the tour posts at the following blogs: March 15th Cindy Beck, Review March 16th David J. West, review, interview March 17th Cindy Beck, Interview March 18th Tristi Pinkston, review March 19th Rachelle Christensen, review March 22nd Shanda, LDS Women’s Book Review March 23rd Kimberly Job, review March 24th Heather Justesen, review March 25th Christine Bryant, ReviewMarch 25th Connie Hall, Review
March 26th Kimberly Job, interview March 26th Heather Justesen, interview March 27th Keith Fisher, reviewMarch 28th Ali Cross, Review March 29th Rachelle Christensen, InterviewMarch 30th Heather Gardener, Fire and Ice Book Reviews March 31st Danyelle Ferguson review, interview