Book Review: “Women of the Book of Mormon” by Heather B. Moore 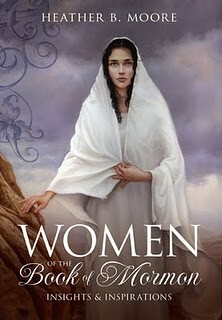 Heather B. Moore’s newest book, Women of the Book of Mormon is also her first non-fiction offering. Heather has made her name in the LDS market with her historical fiction books, including the Out of Jerusalem series, and her prophets series including the books Abinadi, Alma, and Alma the Younger.

her research on her fiction books put her well in the know about the lives and times of the women mentioned in the Book of Mormon and eventually led to this book.

First I have to say how much I love the cover, and what a talented artist Adam Abram is. Cover art is such an important part of why people are drawn to books, and a picture of Mary on the cover is a fitting addition.

Okay, so you’re thinking that Mary wasn’t in the Book of Mormon, she was in the Bible–and you would be correct, but this book isn’t fiction about women who existed merely during Book of Mormon times. There are twelve chapters, each describing the life and times of the women mentioned in the Book of Mormon. There is historical context, details about how they would have lived, the challenges they faced based on what is known of the culture, and from what we learn in the scripture, and very few women were mentioned in any scriptures. Mary is one of them, and she was mentioned by name more than once, hundreds of years before her birth half a world away.

Each chapter in this book is ten pages or less and includes a picture of the woman or women in question, and they are great nuggets of culture and personality that can be read as preparation before reading various sections of scripture to add meaning or depth, or even as a valuable insights to add to lessons that cover pertinent scriptural contexts. I highly recommend this book. The chapters cover the following women, or groups of women: