Grow Pineapple in Your Living Room

Unless you live in a tropical area, chances are you’ve never seen a pineapple growing near you, but did you know you can grow them in your living room? It can take up to three years for them to produce fruit, but it is possible.

For a plant to produce fruits the size of what you’re used to seeing at the grocery store, you’ll need to be prepared. Pineapple plants need lots of light and often grow up to six foot across, though you can keep them trimmed back a lot smaller and still get fruit. The resulting pineapples will be smaller, but at least you won’t have to give up your living room for it.

The first thing to do is make a trip to the grocery store. Look for a fruit with green, firm leaves with no yellow or brown. Check where they attach to the base of the pineapple to ensure there are no gray spots, which are scale insects. Also, you want to the fruit to be golden brown with no green, and when you tug on the leaves, they shouldn’t come out, as that is a sign of overripe fruit.

Now that you’ve got your fruit home (or two if you want to give yourself a better chance of success) twist or cut the top off of the fruit. If you cut it you will have to be certain none of the fruit clings to the top as it will rot and could kill the entire plant later.

Remove the bottom half inch to an inch of leaves, and make sure the little root buds are exposed. Next, some people recommend letting the top sit out for a week or so to dry out before starting roots, while others put the top directly into water. 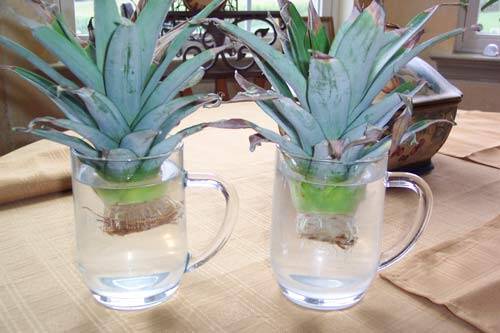 It can take three weeks or more for healthy roots to develop and you need to change the water every few days while you wait. You can use any container, clear, colored, or even a coffee mug for this portion, just make sure you place the plants our of areas that experience temperature extremes.

When the roots are an inch or so long, you can plant the tops in any good potting soil that is at least 30 percent well composted matter or perlite. It’s important to provide good drainage, as growing plants don’t like to have their feet wet, so place a piece of broken pot or some similar object over the hole in the bottom of the pot and then use half an inch of gravel across the bottom before adding potting soil. Tamp the soil in firmly around the plant. Keep the soil damp, but not wet as this will cause rot. 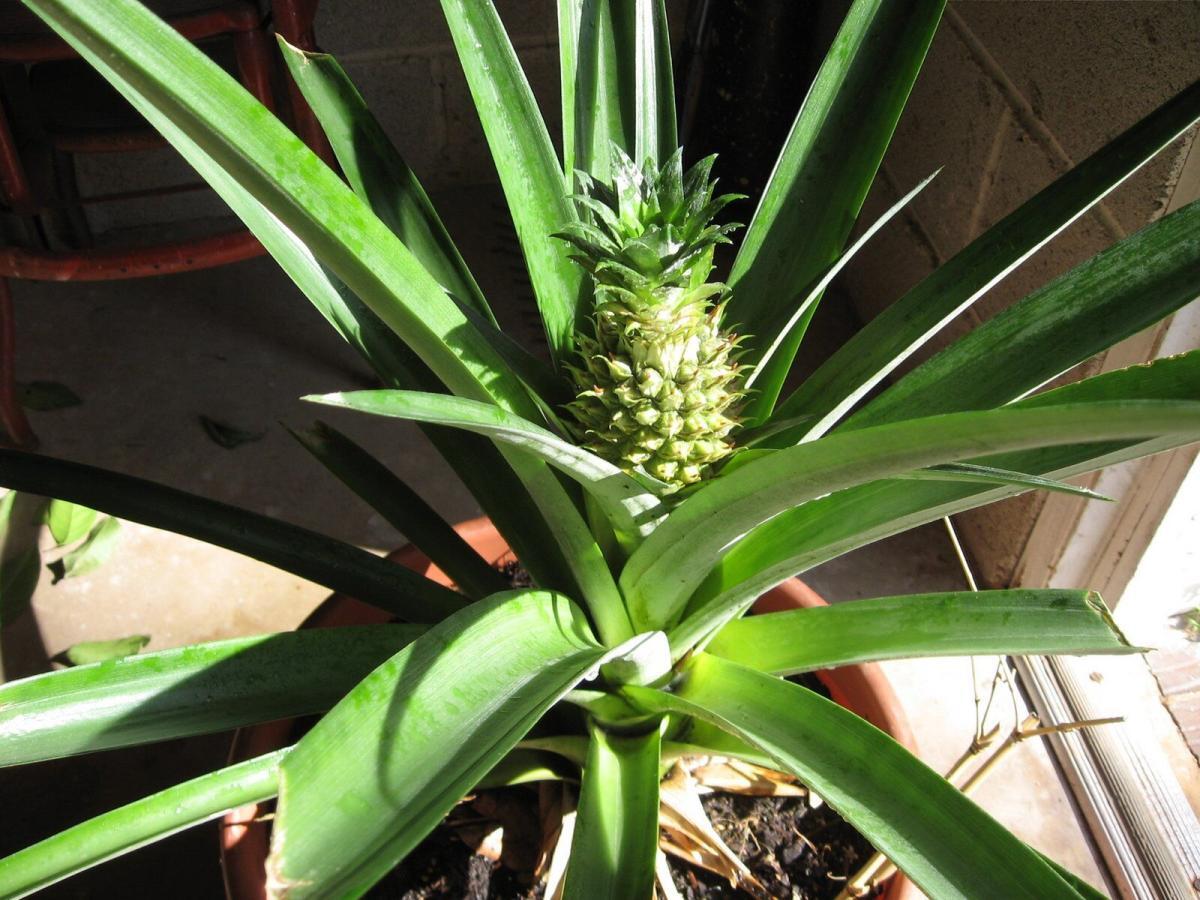 It take at least eight weeks for new roots to be established. Do not fertilized until roots have begun growing, and then only every couple of months. Water about once a week for the first year, a bit more if you place the plant outside in the heat of summer. New leaves should begin shooting up about eight weeks after potting, and the original leaves will begin to die back. Remove dead leaves throughout the first year. The plant will probably require repotting into a twelve-inch pot after the first year. This is the last pot it will need. The fruit takes six or eight months to mature once it begins to grow and will provide an interesting show of flowers several months into its growth. Below is a pineapple growing in someone’s house–what a conversation piece that would be!