Larry is a girl

Several new things going on in my life. First, on Friday I was out collecting eggs. Now my duck/goose enclosure shares a fence line with my chicken run, and until a couple days ago, the birds could scoot under a couple sections of fencing to reach the other side if they wanted. My hens did this on a regular basis, but when one of my big geese, Inky, started doing it, I was rather surprised, she’s not exactly a light weight. 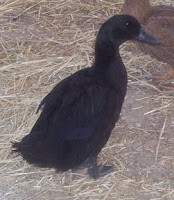 ected eggs Friday. There were three in the hen house, so I went over to the goose side to see who had left me treasures on that side of the fence, and found three more. That gave me two brown eggs, three green eggs and a dirty, gray/green egg. Now, I had checked that spot in the nest earlier in the day and knew the darker egg was fresh and I only have three green egg layers, so I got online and did some research. It turns out that the Cayuga duck that I had been thinking was a drake was actually a hen. It wasn’t the first time I had come across eggs that color, but I had figured the previous ones were old eggs left by one of my chickens. 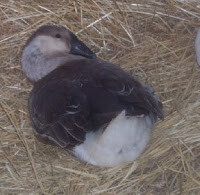 About six weeks ago I started finding goose eggs in the same nest, and only recently came to the conclusion that Inky, My African Goose, was leaving them. I had been under the impression that Inky was male before as well. lol

In other news, I had someone spread the road base that I’m going to build a flagstone patio on later this summer, and I got my pond liner down this weekend, and filled it with water. The pond is fairly small, and I’ll have to attach a picture later, since I’m not sure where DH stashed my camera. Hopefully I’ll have time to visit a nursery that carries aquatic plants while I’m out of town this week. Fish will come a couple weeks later. I can’t wait!